One of the problems we have with elections right now is that they’re too long. Trying to expect a candidate to make it over a year without making his/herself looking like a nutcase is nearly impossible. It’s just as hard for the President… everyone wondering who’s running this place since he’s on the road all the time trying to get elected. And every second of every step of every speech is being ridiculously analyzed to death until our media can find some kind of scrap of an issue to pounce upon. It’s disgusting.

I’m no candidate, but putting yourself out there in social media opens you up to the same scrutiny. As you continue to write, tweet, update and share, the chances for you to make a total jerk out of yourself nears 100 percent. If you never do, you’re simply not putting your heart and passion into this. I stick my foot in my mouth all the time. One day I’ll tell folks there are no rules to social media, then I’ll yell at everyone on Google+ for the way they’re using it.

A lot of people (and companies) would cringe at the thought of getting caught up in a contradiction like this.

Why? I’m not even going to let the fear of looking like a jerk stop me from expressing myself. If you don’t like it, as Chris Brogan commented… you can drop me out of your circle.

I met two amazing people at BlogWorld Expo and I want to mention them here. One was Aisha Tyler, a person with so many talents (including the quickest wit I’ve ever witnessed) I can’t even list them. 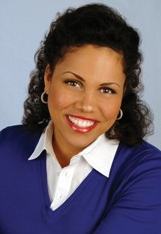 After the keynote, I happened to sit down with Miss Lori, a celebrity known for her work on PBS and her continued work in social media, in the media, and in education. We spent hours talking… and I was even blessed to share a cab with Miss Lori this morning! I can’t even put into words how amazing she was to speak to.

Interesting… the two people that made an indelible impression on me were brilliant, strong, black, female and beautiful. Now – before you start throwing your dirty old man jokes, I’ll cut you off right there. It wasn’t the beauty that got me… it was the awe inspiring courage of these two ladies. I thought it was tough for me to step out but I can’t even imagine all the things that could have held Aisha and Miss Lori back. It hasn’t slowed them down. They’ve been blazing a trail everywhere they’ve gone. And social media is just the next thing for them to conquer (they’re already well on their way!).

I haven’t stopped thinking about it.

One of the things that’s propelled my growth in this industry the last few years has been my ability to work past the fear of failure. I simply stopped listening to people who told me I couldn’t, wouldn’t or shouldn’t. I stopped listening to colleagues, friends and even family. I stepped forward anyways. Folks… I’m 43! That’s how long it took me to overcome and step forward. Even today, when someone says that folks are talking behind my back or they share rumors, I don’t retreat – I attack. Fear paralyzed me for 20 years. It stole at least half of my life, both personal and professional. I am not without fear, but I’m never going to let fear stop me again.

That said… I’m a total wussy compared to Aisha and Miss Lori. Both of them dove into social media without a support group (I was surrounded by geeks). Both of them came from traditional media where social media was (and is) still viewed with skepticism. Both of them are women, culturally there’s a gap there with women and technology. Both had an impressive resume and continued growth in a traditional career. Not to mention that this industry isn’t exactly a diversity magnet.

But they did it anyways.

Why? In listening to them, it’s because their passion and vision to see there was an opportunity in this industry was far bigger than any fear they may have had (I don’t even know if they were fearful!). Aisha put it perfectly in the final keynote destruction… f*** them she said. I was pumped listening to that because it was what I’ve been saying inside everytime someone talked behind my back about my impending doom.

You have to understand that the second you separate yourself from the herd, you’re different. The herd wants to pull you back in. They don’t want you to run ahead. They want to hold you back. You can’t let them. Luckily for you, there are other ones like you that will help you. As I spent time with my friends at BlogWorld Expo, I found that I was at home with people that wanted me to succeed. And I want them to succeed, too.

Who’s holding you back? I know what you can tell them… just ask Aisha.