Last week’s poll came at a solemn time but it had to be asked… do people think that Apple would survive without Mr. Jobs at the helm? It’s an important question for folks in the marketing industry for a few reasons… first is the hardware the supports much of the digital publishing industry, second is supporting Apple goods (iPads, iPhones, Safari, etc.) and third, developing the staff of the future.

Responses were favorable that Apple has a solid future: 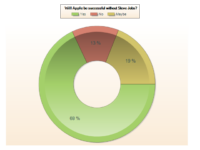 My personal opinion (which really shouldn’t matter since I don’t have intimate knowledge of the company) is that the design aspects of Apple have largely been the creative work of Jonathan Ives for quite some time. Where Mr. Jobs appeared to be pivotal, though, was cranking out that last 1%… whether it was performance, size, workmanship, or any other little detail. And although Mr. Ives work has been absolutely stunning, without a CEO to support that last 1%, new leadership may be tempted to let things go just a little bit. If they lose that 1%, though, mark my words… it will spell doom.

Luckily for Apple, it appears the market is optimistic as well. Trading was high when Mr. Jobs passed, but it appears the stock maintained it’s value… which is significantly leading the market and other technology companies.

Apple did just hit it a small hiccup. It appears that Siri is synonymous with a derrière in Japanese. I’m with some of the fans who believe it would be quite a compliment to change the name Siri to Steve… and adjust the voice accordingly.