You guys may or may not know that I recently moved over to a MacBook Pro at work. I'm happy with it, it's impressive. OSX is great… but I still have applications that crash and I've still had problems with it. I'm not so in love with it that my household is all Mac. I have one G4 and the rest of my computers are PCs running XP, along with a Buffalo Linkstation running Linux.

Am I the only guy in the world that's really not impressed that Apple built a phone? It's a phone people! Terms like ‘revolutionary' are being used. Revolutionary? Really? What am I missing? Isn't this just Phone 2.0? 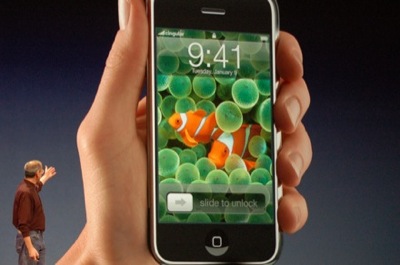 Let's go down the list of features and tell me where I'm going wrong:

Cool, they improved a touch pad.

Wow, bigger screen. I already have a ‘virtual keyboard' on my phone.

Yup, got that with my phone now, too.

Yup, got that. And my phone does video and audio, too.

My screen rotates when I slide out the keyboard. Ok… you got me… motion sensors are sweet.

Sweet. Voice to text was just what I needed when I'm checking my voicemail on the highway! I can scroll with two fingers as I run into the guardrail!

With a browser and internet connection… yup, I do that as well. Of course the extra inch of screen will help me find my way easier.

So I can check the weather as I'm walking to work! Oh… wait a sec…

I know that I'm being flippant about this, but I just don't get it. Sounds like a lot of hype for a phone upgrade, doesn't it?

Throw broadband video to video connectivity on that bad boy and this Star Trek geek will hit the ceiling. Without it, though, this is just …dare I say… a phone.

PS: Special apology to Bill… he was beside himself salivating at lunch today and already calculating how many years of his retirement he had to give up to buy one. I don't mean to insult you Bill, but this is some damn good marketing hype for a phone.