Some folks are calling it micro-blogging; however, I personally see it as more of a discussion or open forum than a blog since it's much more interactive between the microblogger and the audience. A blog provides a topic that the blogger can open a discussion on with a detailed post that comes with authority… Twitter doesn't allow room for the authority, it just opens the conversation.

Twitter allows you to ‘follow' those folks you might be interested in. There are some very big names in the tech industry that post often on Twitter. Some of them actually request information or supply sneak peeks of upcoming articles and news. I actually heard the news that Heath Ledger died on Twitter – not on the news or on the web!

If you wish to reply to someone, you can utilize an @ symbol. @douglaskarr means you are replying or speaking to me. If you want to speak to me directly and privately, you can type D douglaskarr.

Rather than go to my Twitter Page to keep track of everyone, I utilize a third party tool called Snitter. Snitter was written by Snook. When you wish to Twitter and put a link in your Tweet, you can shorten the URL by using Snurl, which is built right into Snitter.

You still with me?

Twitter has a 140 character limit on each of your posts. Why 140 characters? Not sure but I believe it coincides somewhat with the 160 character limitation found on SMS messages (messages sent with your phone). Twitter is mobile integrated… you can get and receive tweets via mobile phone.

So what the heck is a Twoosh?

If you post a tweet that is 140 characters even, that's a Twoosh, likened to the Swoosh sound of a basketball when it slides easily through the basket. My friends at Recursive Function have built, what can only be defined as, the most useless, inane, innocuous but harmless games I've ever seen on the internet, Tweet140. 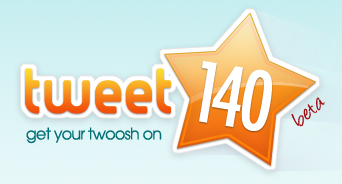 Tweet140 actually tracks each of your Tweets, scores and ranks you on your ability to average as close to 140 characters per Tweet as possible. They also have fun and ridicule you when you stink.

I just left duck status behind, and am now a swan. Tweet140 holds true to the 140 characters, too, take a look at the home page and all the messaging is in 140 character sets.

I can't believe I've been sucked into this!

Do you get it now?

Hope to see you Tweeting on Twitter with Snitter, soon! Hope you make the Twooshboard on Tweet140!