This is more of a question for discussion rather than a comment. My experience with blogging is that consistency is everything. If your readers expect to have new content on a daily basis, they will return to your site on a daily basis to get that content. A good question is:

How many times will a visitor return to your website to check for new content before they stop returning?

I’ve been doing some testing recently. It’s not a very scientific approach that I’ve taken, but when I wrote a blog post on Starbucks that received a lot of attention (A), I decided to let it ride to see what would happen.

One interesting note is that the post was popular for approximately 72 hours (B) after it was written. It seemed to take a day for folks to digest the content and then an additional day to respond and write about it on their blogs. This, in turn, returned traffic to my site for a second day. By the third day (C), though, the attention had worn off and the blog returned to its normal levels of daily visitors (not including the 2,000 RSS Subscribers). 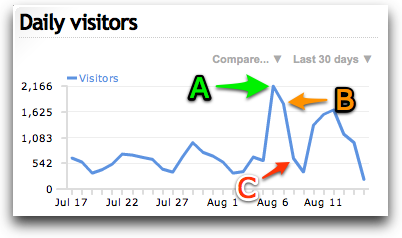 The fact that the blog returned to normal levels (until the Tuned In Calculator debut) denotes to me that the Digg or Stumbled traffic, though encouraging, isn’t necessarily the traffic that I’m after. These are the true surfers – finding interesting content out there but not returning for more. I’m after the folks who return – the folks that subscribe to my feed, visit regularly, and participate in the discussions I’ve put here.

In a typical media situation, I would have let the buzz continue before disturbing it with a new post and a new topic. I would have continued to attempt to ‘ride the wave’, perhaps even continuing the conversation into 2 or 3 additional posts. Though that may have helped to maintain the number of (B) temporary visitors that found me 48 to 72 hours after the post, I decided that I should continue to post daily – for my core readers (C) who continue to return to my blog.

It’s easier to retain readers than it is to acquire new ones. Jumping on that diggwagon is like moving from a marathon to a sprint. The marathon builds core readership, moving consistently and deliberately, meeting the expectations of your core subscribers. The sprint is an exhausting pandering to getting others to vote for you, writing link baited content, and simply trying to pile on a new mound of temporary readers daily. You can do it, but I’m not sure whether you’ll be able to finish the race or not.