This is a phrase I’m growing tired of – quickly – during this presidential candidacy. I’m not sure who penned the original term but I’ve seen it used widely this season. Most recently, the governor of West Virginia used the term to discuss why Barack Obama lost West Virginia in a landslide to Hillary Clinton. He’s trying to defend the opposition view that West Virginia still has race issues and Obama lost it simply because he didn’t spend enough time pressing flesh, aka shaking hands.

It should be of interest to marketers to realize how much of an impact that pressing flesh really does have in an election. Campaigns are a lot like strategic database marketing campaigns on methamphetamines. All sides bring in mathematical geniuses, deploy timely and targeted marketing through a variety of mediums, and work hard to press the flesh. Marketers should take note, outside of the dirt of politics, that these tactics work.

What we should lean from the Obama campaign

Many of us forget that Hillary was treated as the 2008 Presidential Candidate a year ago and Barack Obama was on a very short list of inexperienced ‘up and comers’ in the Democratic Party. His precision marketing efforts have paid off, though. One look at the Obama site and you’ll find a message for every target: 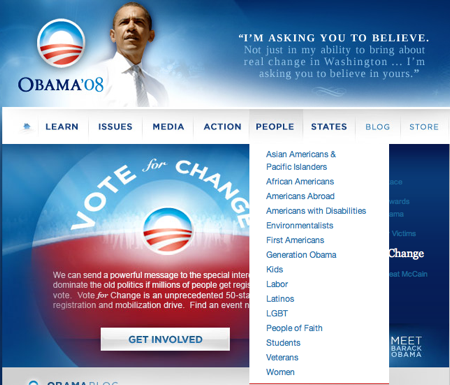 Here in Indianapolis, I’ve received viral email where I could donate, on behalf of someone, to the campaign. The Obama campaign opened (and subsequently closed) an office 1 block south of the Circle here in Indy – prime real estate to press the flesh. I also received some direct mail from the Obama campaign. A look at events and you’ll find that Obama is a hand-shaking machine, with over 16,000 events thus far and a ton more to go.

I don’t believe that Obama lost West Virginia because he didn’t shake enough hands. I tend to agree that he lost simply because his message didn’t sit well with Appalachia.

Back to the point.

I’m not promoting Barack Obama for President, I’m simply recognizing the incredible marketing machine that he’s put into place. Everything his team is doing is right – and it’s important to note that they never miss an opportunity for pressing the flesh.

Pressing Flesh is working for me

I’ve had some moderate success in social media, especially here in Indianapolis. Interestingly enough, there are many Indianapolis bloggers whose shadow I barely fall into from an Internet stats standpoint. At a regional level, though, I believe I’ve got more of a name (and face) that folks remember.

I owe my local success to pressing the flesh. My work with Smaller Indiana, Indy Cultural Trail, The 2012 Superbowl Committee and taking every opportunity to teach local business people about Social Media has had much more impact than my blog ever would. That’s a tough pill to swallow given all the time I put into my blog but it’s important for folks to realize that blogging is simply not enough!

Get out and press the flesh! Blogging does provide a transparency and honesty that a marketing brochure site can’t provide – but it still doesn’t provide the experience of looking someone in the eye and shaking their hand.

It’s important to note that I would have a much larger blog with greater national exposure if I was able to make it to national events. That’s always tough with a full-time job, but I’m still hoping to make it to a few this year.