It was a great start today to Blog Indiana, and Jason Falls started the juices flowing by playing down the importance of search engine optimization, putting some doubts out about ghostblogging, and speaking to bloggers that it’s okay to not follow the rules. Jason’s keynote was much more in-depth and thorough… but these are the things that stuck in my craw.

At least one of my friends could sense my reaction… and I had two ghostbloggers sitting behind me so I’m sure I know what they were thinking!

I agree 100% with Jason! There aren’t any rules. It would be like Alexander Graham Bell putting out a book on how to use phones a few years after he created them. The blogosphere is still young and what works for you may not work for others. My readers already know how I feel about social media lies and rules are a lie.

We don’t have rules… what we do have, though, is some experience with the medium and recognizing what works and what doesn’t work so we can pass on that knowledge for others to test.

Chris Baggott did almost come out of his seat when Jason suggested not worrying about search. He asked an equally juicy question, “Aren’t you doing people a disservice by not having your content… great content… found in search?”. Of course Jason didn’t think so.

BTW: This wasn’t an all out debate – just a healthy discussion of blogging strategies. Jason did a fantastic job and was very transparent about why he doesn’t need to worry about search. Chris’ question was one that really raises a valid point, though. If there are searchers out there looking for you… and they can’t find you, isn’t that a problem?

Is it a problem for the search engines? Or is it your problem?

My answer would be that it’s your problem. Google has been overly generous at supplying all the tools necessary for people to understand how to optimize both their site and their content. Google even supplies us with our rankings by keyword or phrase, and search volumes on said keywords – recognizing that those who wish to compete in this race need to make some adjustments.

I hate playing to the Google gods just as much as anyone else. I wish I could write compelling content and didn’t have to be concerned with mentioning keywords, synonymous terms, and combinations of keywords in my content. I do, though, so that people looking for these answers will find them on my blog! And find them they do! 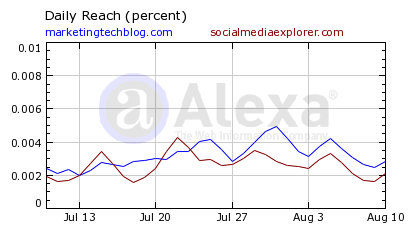 It’s all about potential! Does Social Media Explorer do well? Yes, of course. Does Jason get consulting and speaking engagements from his blog? Yes, he does. But there’s potential for Jason to get much more traffic and new inquiries by simply optimizing his blog’s content. I’m not recommending unnaturally speaking – just placing some keywords and phrases where they both make sense and attract search traffic. Simple blogging for SEO.

Check out how our blogs perform and you’ll find my blog has a bit more reach… but Jason is much more engaged nationally in the social media space. He’s an outstanding presenter (I’m still learning) and an entertaining speaker. He deserves more attention. I think ignoring the opportunity is hurting his blog’s potential – and he’s not benefiting from it either.

NOTE: I sent Jason my new eBook at no cost. I hope he changes his mind. 🙂

Ghostblogging is a Noble Profession

When is the last time your boss got a promotion for their work? Did you sit by idly as they moved up the ladder? Or did it bother you just a little bit that you helped to put them there? That’s what Ghostbloggers do. Ghostblogging isn’t a dirty word nor is it a dirty profession, it’s an incredible one. A great ghostblogger investigates the source and accurately writes the posts on behalf of them.

I think I’ve got too big a head to do that. I want credit where credit is due!

Is it fake? Is it transparent? I don’t believe it is! If I sat and did an interview with you and I wrote all of your responses – but I wrote it both eloquently and in an entertaining manner, does that make you any less of a person? There are some BIG names in the blogging world that don’t write their own material folks – I hate to break the news to you!

As long as the premise of those blog posts are your message, why would anyone care that someone else typed it up? Did you know that Obama’s inauguration speech was written by a 27 year-old white guy at Starbucks? Does that change your opinion of Obama? Is he fake? Was that not transparent?

I don’t think so… I thought it was an amazing speech, and I have no doubt that Obama meant every word he said!