A few years ago when Bluetooth hit the market, there was a buzz in the advertising industry. How great would it be to have an ad jump on your phone when you are in the proximity of the product, service or business? I can see advertisers salivating now! 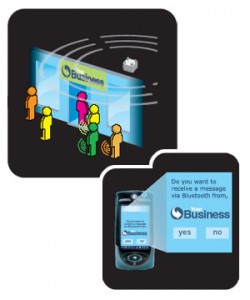 This is an image I found on Portfolio's site that explains the process.
As someone comes within the proximity of an advertising spot, a users' Bluetooth-enabled cell phone pops up a message for an ad.

No wonder Advertisers are salivating over it – you have the four P's of marketing all in one: product, price, promotion and place! IMHO, you're missing the new and most important ‘P' of marketing, though… Permission!

The number of advertisements that the average American sees on a daily basis has exploded to an overwhelming 3,000 messages a day. So many, in fact, that we've added verbiage to our dictionary for unwanted messaging – starting with email and now widely accepted as any intrusive advertising – SPAM.

Americans are sick and tired. We forced our government to do something about it, creating the Do Not Call Registry and the CAN-SPAM Act over unwanted email. The CAN-SPAM act, ironically, has simply made spamming easier from spammers and tougher on permission-based emailers.

Stop emailing me! Stop calling me at dinner! Stop! If I want your product or service, I will find you! I'll look you up online. I'll ask my friends for recommendations. I'll read blog posts about you.

Bluetooth marketing has already evolved. Michael Katz has penned the phrase, Adverjacking, describing the practice of your competition hitting you up with a competitive message while you're in the proximity of the competition. Ouch! Imagine buying a car and getting a message via Bluetooth from the dealership next door telling to you to come over immediately for $500 cash!

Advertising is a lot like a virus (in more ways than one!). As a consumer is exposed to a virus more and more, their ability to resist that virus increases until they are eventually oblivious to it. As advertising gets more pushy, consumers become more resistant to them. Keep going after more intrusive advertising techniques and you're only going to hurt yourself – and the industry.

Why would people do it then? Because it works! For 1,000 people that you can send the message for $500, 5 might respond. The ROI on that for simply pushing a Bluetooth message is in the thousands of percent. And the folks you really anger weren't going to buy from you anyways, so who cares?

The problem is that this is short-sighted marketing going after instantaneous results with no long-term strategy. The damage that you are doing is difficult to measure because it only impacts results much further down the road. By then, your VP of Marketing or Advertising may be long gone and sucking their next business under.

The bottom line is that if you don't give the fifth ‘P' – Permission – some attention, you're more apt to do major damage to your long-term marketing. In other words, just because you can use a push technology such as this, doesn't mean you should.

I'll even go all out and say that this is the type of advertising that evolved from the technology, and not vice-versa. The founders of Bluetooth weren't sitting around one day and saying, “Man, I wish there were a way we could push advertising to a cell phone as the person walks by!”.