I’m not sure how much more I can take! Internet Explorer 7, FIrefox 2, and a MacBook Pro all in one week. I’m behind on my RSS feeds by a few hundred posts, behind on my email by about 200 emails… and I have more work than I’ve ever had. What in the world is going on? 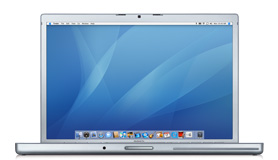 First… Internet Explorer 7. I’m really impressed with the alternative menu locations and organization of the screen. If you’ve not tried it already, the full screen is fantastic. And, of course, the tabbing is great.

Second… Firefox 2. I just downloaded it. Really zippy! I like it. I haven’t tested out the spellcheck but I hear that’s a great feature. That means I can dump the Google Toolbar.

Third… drumroll please… the MacBook Pro. I got the works on this puppy and I’m pretty blown away at the ‘cool factor’. Of course, after I bought it, I had to go buy a new laptop bag that was nice and sleek. I’m still waiting on a monster monitor at work… but in less than a week, I’m almost fully converted.

I did load Parallels on it (WOW!) so I can run XP when I have to on one screen (or in a window) and OSX on the other. That just blows me away. I don’t think I’ll be a Windows Cripple for long. I have to tell you on look and feel, OSX is far more advanced in look, feel and operability. I’m not an Apple snob (yet), but I could get to become one. I suppose the first time I pop it open at Borders, I’ll officially be one!

Some things I don’t like about the Mac? The magnetic power cord is cool and all, but the other end sucks… that’s a big ol’ clunky power supply. And they overengineered the extension cord. Lots of design for so little feet.