Like an idiot, I joined 165,000 other gadget-obsessed technologists, marketers, influencers, hucksters, and assorted others at CES 2017 last week. 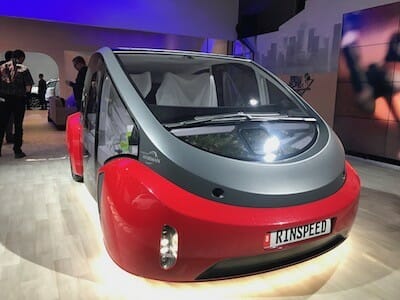 This car has a garden on the dash

Most of my time was spent meeting people. Or, more accurately, in Lyfts, Ubers, and cabs braving Vegas traffic from hell on my way to meeting people. But I did reserve eight hours for something everyone who loves technology should do at least once: wander the floor of the main convention halls at CES, the Consumer Electronics Show.

What do you see? You see tomorrow.

Or, rather, visions of tomorrow that may or may not come true.

Many will hopefully not, like the radiation-proof boxers for men, the tiny jeanshorts for hot young women that vibrate to tell them which way Google Maps wants them to go, or any of five different “smart” robots that want to be your virtual friend, crush, or replacement significant other, especially if you're Japanese, young, and male.

But walking the floor made it abundantly clear to me that there were at least 10 mega-themes immersing consumer tech companies.

Here they are, in no particular order.

I don't know this from personal experience, but apparently we really, really love our pets. And, we really want to be nowhere near them.

So we need expensive pet tech that allows us to feed our pets remotely via apps on our smartphones. And we need to be able to video chat with them so they know we love them, and will be home soon.

Or at least when the automatic pet feeder runs out of Kibbles & Bits.

At the pre-CES “Pepcom” event where exhibitors who pay more can trot out their wares to press flunkies lured by free food and young, attractive women in college cheerleader outfits (I kid you not), I saw no fewer than five, but maybe six, or possibly even eight companies with smart locks. 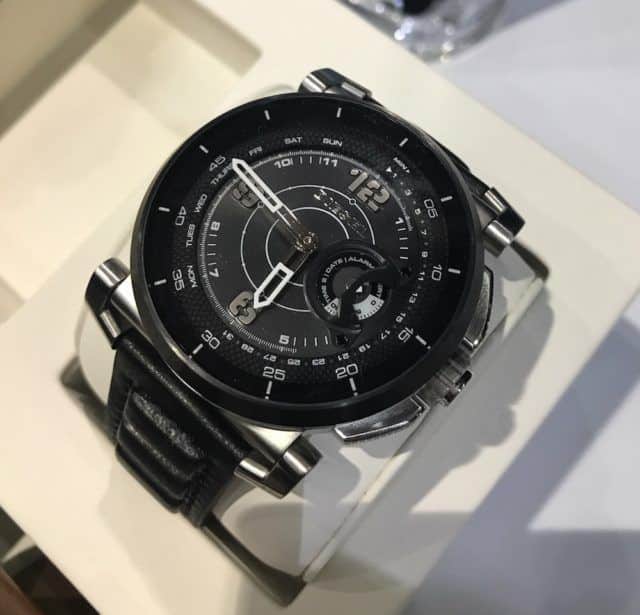 I cannot be certain of the actual number due to the amount of free Corona that organizers forcibly poured down my throat.

In any case, keys are on the verge of extinction, possibly, which is great because the power never goes out in my community. But we will be able to give strangers virtual app-controlled keys with time-delimited access control to clean our homes, drop off goods and services, and rifle through our belongings.

Journalists know all about the massage chairs at CES. This time, I went first thing in the morning, before the madding crowds were even let in the castle gate.

Two good things about massage chairs: they're getting cheaper (think $3,500, not $7,000), they're getting better, and they're starting to get styling that looks like it might actually fit into your home decor without making you look like a total jerkoff.

(Yeah, I know that's three, but the Corona has had a lasting effect. Sue me.)

Read that last part carefully. “Starting” to get styling that “looks like” it “might” actually not make you look like a jerkoff. In other words: not quite there yet. The good thing about this styling fail: it'll save you thousands.

4K is apparently a wonderful technology, and I'm looking forward to purchasing it when the content that I get from my satellite provider, Netflix, Youtube, iTunes, and other sources actually semi-routinely supports it. 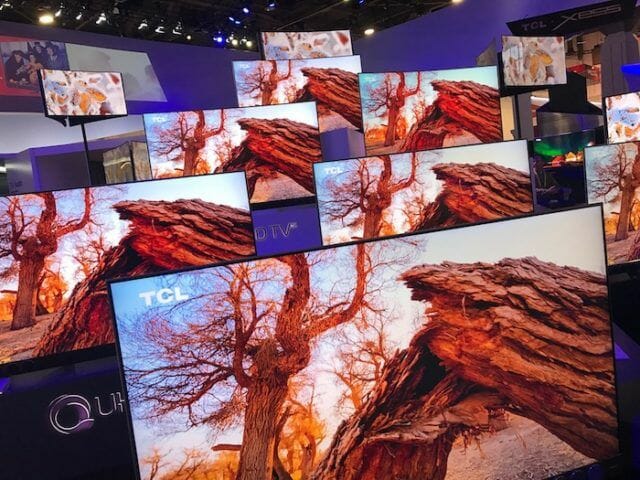 (And when I can stream it to my home without downloading it the night before.)

But 8K is even better than 4K. Twice as good, as you know if you're particularly good at math. (Actually 4X better, if you're spectacular at math.)

And I've decided I'm holding out for the 98″ 8K TV that I saw in Samsung's gargantuan CES booth. The price is $400,000, but I'm not worried about that, because Russian oligarchs and VC-backed Silicon Valley Series B startups will buy enough to fund further product development which will take the price down several orders of magnitude in the next five years.

By that time, 4K content will probably be at least somewhat partially occasionally common, and I can buy another doodad to hang off the TV to upscale it to 8K with “no perceptible loss of quality.”

5: Drones that actually do things 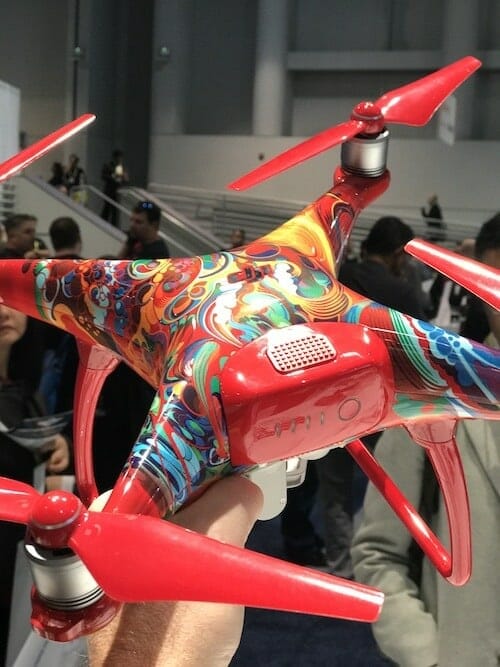 A colorful drone at CES. This one doesn't do anything (except fly)

There were still drones, and drones, and more drones. But these drones actually do stuff. At least in carefully scripted and only-slightly-retouched videos from unbiased manufacturers.

I saw drones that do pro movie-level videography. Drones that race. Drones that you can shoot. Military drones. Border patrol drones. Farming drones that spray pesticides but only in ecologically-approved ways. Drones that take freshly-harvested organs from cadavers to hospitals where they're needed. And drones that deliver pizzas when you're hungry, lazy, and uninterested in healthy food.

Plus, of course, a drone-killing gun.

Reality is quite borning and mundane — for example: most of your job. Augmented reality sounds much more … enhanced, virtual reality is even better, and mixed reality sort of combines the best of both worlds. 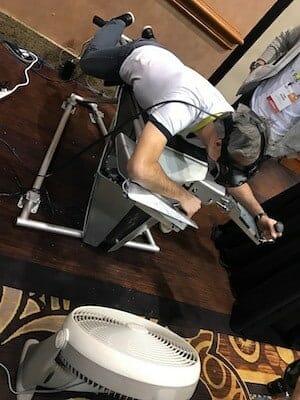 All three were very much in evidence at CES 2017, with more cheap VR headsets that allow you to hold your phone a couple inches from your face and notice how pixelated that supposedly higher-definition-than-definition screen actually is than VR companies that will actually survive until next year's show.

But the Zeiss employees almost confirmed that Apple's iPhone 8 will do augmented reality.

All wires, consumer technologists appear to have decreed, must die. This is welcome news to me, as the proud owner of a PlayStation VR set with more wires than Apollo 13.

The universe giveth and the universe taketh, however, and now batteries are very, very important.

Artificial intelligence is the new “all natural,” someone recently said, and clearly all gadget marketers got the message at the same time, pre-CES.

Everything is smart, everything is AI-enhanced, and everything is always learning all the time how to serve you better with small incremental improvements based on usage. A new law was passed by Congress, and no new products — hairbrushes, toilets, and cups included — may be launched without a full suite of sensors, radios, cameras, chips, and, of course, the connected app that controls them all.

As we all know, pulling out a phone, authenticating yourself, finding and opening an app, and looking at your screen is very, very 2016. 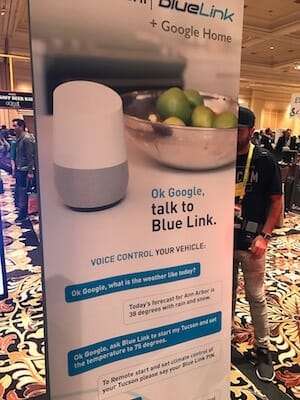 And it, of course, talks back to us.

Amazon Echo is over a year old, of course, but 2017 is the year it is going to explode, with the number of “skills,” or mini-apps that it runs, doubling just in the single week of CES. With Cortana, Viv, Google Assistant, and yes, grandma Siri, we've got a significant future of conversational tech headed our way.

10: Augmented reality for the ear

Showing the eye things that aren't real is one thing. But it's not cool to get left out, and ears have formed a political action committee to ensure their rights are respected.

So augmented reality for the ear was a thing at CES, and frankly, it's a great thing.

Manufacturers are bringing out AirPod-style in-ear devices that are much cooler than your daddy's hearing aids, and let you selectively tune annoying sounds — like your spouse's voice — out. Combine these with virtual and augmented reality headsets, and you will soon be able to control sense filters that allow you to mold reality to exactly what you want it to be.

But … I still love tech

It's enjoyable to poke fun at the new gadgets at CES. But to be serious for just one moment, it's more enjoyable just to stroll the floor and marvel at the diversity of gadgets that people dream up.

And to know that somehow, some way, some of these will become mainstream in the not-too-distant future.

John Koetsier is a journalist, analyst, and futurist. As Mobile Economist at TUNE, I forecast and analyze trends affecting the mobile ecosystem. I've been a journalist, analyst, and corporate executive, and have chronicled the rise of the mobile economy. Before joining TUNE, I built the VB Insight research team at VentureBeat and managed teams creating software for partners like Intel and Disney. In addition, I've led technical teams, built social sites and mobile apps, and consulted on mobile, social, and IoT. In 2014, I was named to Folio's top 100 of the media industry's "most innovative entrepreneurs and market shaker-uppers." I live in British Columbia, Canada with my family, where I coach baseball and hockey, though not at the same time.