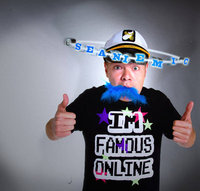 We love SeanieMic, a parody rapper that’s done a ton of fantastic cuts. His songs have made it viral all over the web, so we asked him to spit some rhymze about our book, Corporate Blogging for Dummies. Seanie nailed it!

Here’s Corporate Blogging for the Dummies, the Rap Song:
Bloggin’ For The Dummies by SeanieMic