I’m not sure what ever happened to IntenseDebate… seems to have been swallowed by Automattic with nothing exciting new in quite a while. I left Disqus to test the paid system, Echo, and wasn’t impressed at all.

The feature may or may not have been around for a while, but Disqus is now cleanly integrated with Twitter and Facebook to promote blog posts socially. Today, I noticed that when I clicked “Like” on a post, it provided me with the option of sending that message to both Twitter or Facebook. I could do that before when submitting a comment – but now it’s cool that they’ve added the feature to their like button. 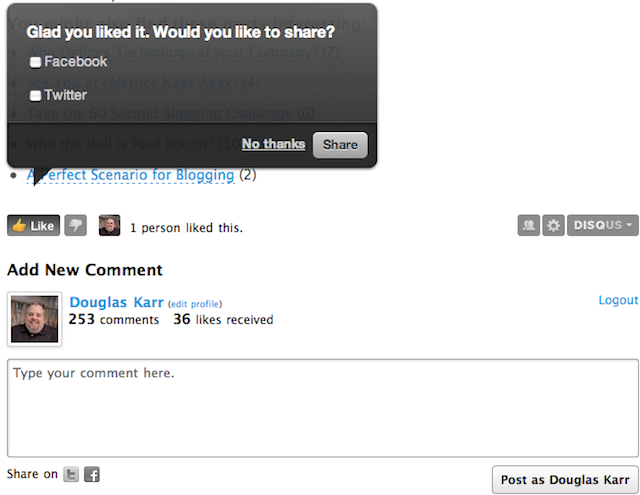 The social integration of their comments plugin, the customization abilities, the fact that it synchronizes seamlessly with WordPress… and the continued improvements, all while keeping the system simple, makes this the best commenting system on the market.

I am interested to see if there’s a means for Disqus to integrate Facebook Comments – perhaps on a tab? I feel like that’s the one social piece missing from their platform… do you agree?