Usability is a science, but some of it is instinctual. I remember having many an argument with people about usability when I worked as a Product Manager. There are some things that are a given – such as how eyes track across a screen (left to right), how they skim downward, and how they expect an action on the bottom right.

Not much science involved, some of these things are both instinctual, and some of them are habitually based on previous trends in online navigation.

Tonight we’ve got a friend of my daughter’s over, so I decided to order online from Dominos. Their new website is quite zippy – looks like it’s all Java. It’s graphically pleasing to the eye, and it’s fast. It’s much nicer than Pizza Hut or Papa John’s… and it works, unlike Donato’s.

Re: Donato’s: Months later and I think I’ve had a dozen attempts where I couldn’t order because of how slow it was or because of a massive .NET error screen.

I did find one glaring issue with the site’s usability, though. Take a look at this screen and imagine you’re filling it out: 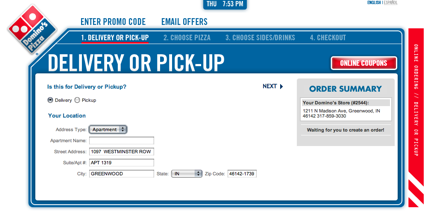 After you fill out your information, your eyes track – and expect – to advance to the next screen by clicking to the right. I had to search for a moment before I found the next button. My attention was grasped by the Coupon button and the field to the right, so I had difficulties finding it.

One simple change could make this page much easier and, I’m sure, improve the conversions of customers: 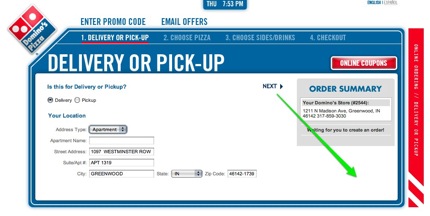 Just moving the button to the right, where my eyes would expectantly track, would be a vast improvement in an otherwise beautiful interface. I’d also find a new color, perhaps green, to provide a visual cue throughout the application until the person is finished. A consistent position, color, and prominence would provide a seamless experience that would lead users through the site.

A fresh addition to the Dominos site is their Pizza Tracker: 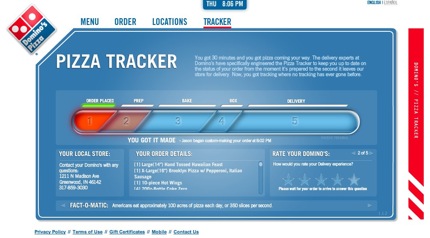 The funny part is that each section fades in and out… with section 5 (delivery) being the largest section. In other words, Dominos may have just built a 30-minute flash file with enough of range to accommodate being +/- 15 minutes (my guess). It’s a gimmick… but it works.

There is some genuine interaction on the page – the name of the delivery driver was on there for immediate feedback and ratings. That’s cool!