Some folks believe that the world is flat because of the Internet. I disagree.

The world may be flattening from a data and utility standpoint… but the fact is that geographic distance between people is still an incredible challenge. I work full-time with a team in India and can tell you that, though the group is incredibly talented, communication and setting well-defined requirements and priorities is more important because of the gap in location. My team and I work hard to over-communicate with one another.

I don’t wish to work with other people than the team I have now, but conference calls dropping, holiday conflicts, timezones, language… all of these produce challenges that remove the productivity that we would have if we were in the next room. The world is not flat.

Tonight I got an invitation to a Fast Company beta, where the magazine is launching a broad, robust social network across enthusiasts of their magazine. I’m going to help beta test the application once a week or so – but I believe the future of the network is just plain grim. 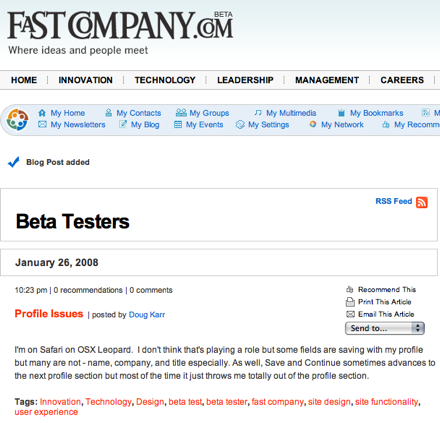 As much as I might participate in Fast Company, the fact is that I still live and work in Indianapolis, Indiana. Heck, I have readers of my blog that work on the West-side of town that I’ve been unable to connect and work with for the last six months. Location, location, location… it’s everything.

So – let’s say I abandon my efforts in networking in Smaller Indiana and work to establish a network and professional connections in Fast Company. Will I benefit? I don’t think so. I can’t afford to zigzag across the country, nor do I want to lose that precious time.

Shel ribbed me the other day as the only guy twittering in Indiana. I’m not, of course, but I am conscious that my geographic location has limited the influence my blog has as well as my influence in the industry.

Before you start wondering, I’ll let you know that I have no plans of moving for several years. My son is a very successful student at IUPUI and my daughter is 13 and would kill me if I relocated her from her friends, choir, yearbook club, etc. here in Greenwood, Indiana. Once they are out of the home and on their own, I will give it some serious thought, though.

Very few of us live and work globally. Perhaps even fewer of us really wish to. The world, as we see it, is local and we’ll continue to work and live local. We build friendships locally, business networks locally, and get paid locally. That’s why broad-facing social networks like Fast Company are simply doomed to failure – they’ve ignored geography as a key factor in networking.

As well, Fast Company will never recognize how business is accomplished locally. Hoosiers have a very different business etiquette. We’re often friends with competitors and share human resources and talent from across the region. Smaller Indiana was started weeks ago and traffic is already dwarfing many of the regions more established ‘mass’ media companies.