Taking a look at recent market share for browsers provides some insight into who is winning and losing the wars. Firefox continues to build momentum, Safari is creeping upwards, and Internet Explorer is losing ground. I’d like to comment on the three with my ‘theories’ of what is occurring. 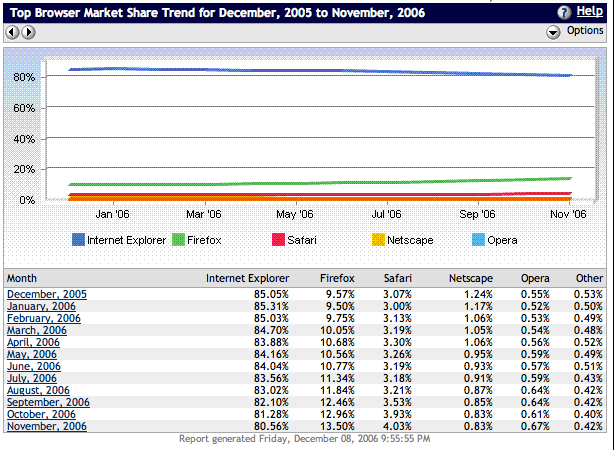 Microsoft must feel quite threatened – but it’s really their own fault. They’ve eliminated any need for their own browser, alienated users, alienated designers, alienated developers, AND they are now allowing others to take them on in other verticals (mobile).

Internet Explorer is really simply self-destructing. I’m not sure where their customer focus is at all.

With that, here’s my tip of the week. Give Firefox a try. For the developers, take a look at some of the remarkable plugins for CSS and JavaScript development. For the designers, take a look at how little you need to ‘tweak’ your pages for Firefox. For users, you’ll open Firefox the first time and be off and running. Here’s the tip:

I’ve been a Microsoft guy for over a decade now, so I’m not a basher. However, I felt compelled to step in and discuss the strategic mess the IE team has really gotten themselves into.