We ran a Zoomerang poll on our sidebar for the last few weeks to get a clear picture of how many companies had adopted a Google+ page. The poll results were a perfect split… only 50% of readers said their company had a Google+ page. While that may seem low, I think the real numbers may be much lower. I was a bit pessimistic that so many had them.

As we looked for our clients’ competitors, we often could not find them on Google+ and that’s one of the reasons we encouraged them to be there. Here’s an example of one of our clients, Lifeline, who have the largest data center in the midwest. Their VP of Sales has been putting out regular content and attracting a good following. 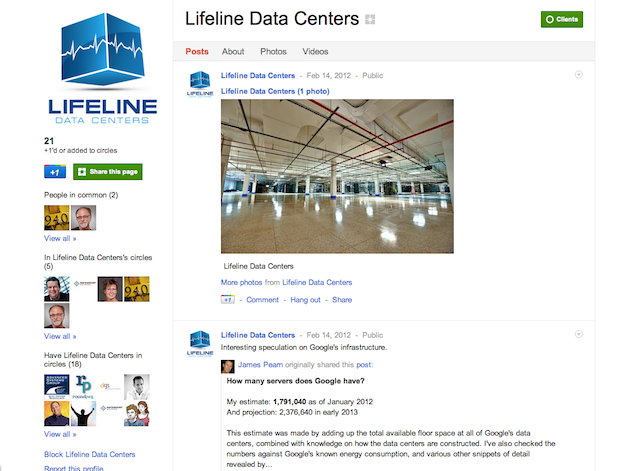 Our experience has shown us that early adoption has led to faster growth when it comes to social media. It’s not necessarily that you’re going to win the battle today… but if and when the social site takes off, your early adoption has made you a leader there. In Google+, when I search for data centers, there are only a few results. The first is Lifeline, the next is a datacenter construction company, and the last is a Canadian Data Center company.

That’s great news for Doug and his team at Lifeline. There’s already millions of users on Google+ with many of them building out their networks. Since there is no competition, Doug can grab some early followers that he may not have reached before and plant his flag in the ground as a forward-thinking, well-connected Data Center expert. This is a strategic move that can position Lifeline well in the industry, not necessarily a tactic that has an immediate return on investment.

Have you researched your competition on Google+? Are your competitors already setting up shop and building authority on this social network that has strong growth and may someday give Facebook a run for its money? You have to remember that it’s not about you, it’s about where your audience is. Doug has found some of his audience on Google+. You should think about finding yours there, too!