Ruth Holladay’s blog today points out an article on an interview with Al Gore and asks his opinions of the media. Specifically, the interviewer questions Gore on the centralization of the media, either by corporations or by governments (internationally). Gore states:

Democracy is a conversation, and the most important role of the media is to facilitate that conversation of democracy. Now the conversation is more controlled, it is more centralized. – Al Gore 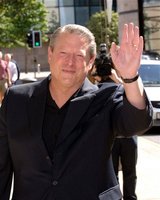 Wow. Not being a fan of Gore, I’m really surprised and honestly pleased at his message here. I’m actually one of those guys that truly believes that the media does try to influence our political landscape.

Don’t get me wrong… I don’t think that the media is a bunch of left-wing nuts in secret phone calls trying to oust Republicans, I simply think that many folks in the media and entertainment landscape have lives that are very different than the rest of us. As a result, their view of the world tends to be different. In addition, the fact that they are well-educated and in a position of outspoken authority, they have a bully-pulpit to sway people’s opinions.

Blogging and the Internet is changing that landscape. After subscribing to 2 newspapers for well over a decade, I honestly don’t pick it up anymore. I read all of my news online, and read the blogosphere’s reaction to the news. More often than not, I am starting to see more news picked up by bloggers than by the newspapers. I think one of the reasons is that blogging eliminates the ‘filtering’ of the message.

Ruth’s blog is a fantastic example of this. Ruth has been released from the bonds of an editor and her blog is smashing its way to the forefront of the Indiana blogging landscape. I love it. After reading Ruth’s articles for years, I didn’t get to see the passion and flames in her message until she retired and began blogging. Ruth is like the bull that escaped the china shop! I might disagree with her message sometimes, but I can’t wait to read her next post.

My hope is that the Internet will continue to be a new path to “facilitate that conversation of democracy”. I hope it provides a megaphone to the voiceless in our world and right here in our own society. Words on a page are truly powerful… especially when they are not controlled.