Last summer we surveyed small business owners to understand how they were using social media.  The results were documented in a series of white papers. 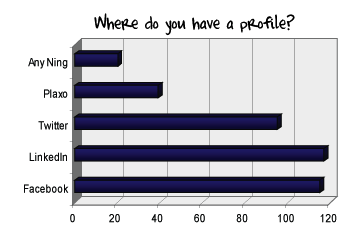 A lot has changed in the last year.  My perception is that more businesses then ever are engaged in social media, or at least testing the waters.  It that is the case, it seems like a good time to revisit the topic with another study.

Here were some of the 2010 Small Business Social Media Study Results:

It will only take a few minutes to complete the survey.  We will publish some of the results here as the responses start to come in!

The results are starting to come in, and one of the most noticeable differences is the amount of time small business owners are spending on social media.  A year ago the vast majority of respondents were spending less than one hour a day.  This year there is a clear shift toward more time on social media.  Is it paying off?   Watch for more updates as the results continue to trickle in.

Lorraine Ball twenty years in corporate America, before she came to her senses. Today, you can find her at Roundpeg, a small marketing firm, based in Carmel, Indiana.

Along with an extraordinarily talented team (which includes cats Benny & Clyde) she shares what she knows about web design, inbound, social media and email marketing.

Committed to contributing to a vibrant entrepreneurial economy in Central Indiana, Lorraine is focused on helping small business owners gain control over their marketing.