There are a couple books that I've read that had quite an impact on how I felt about the Internet and with marketing as a whole. One of the books was Mark Earl's Herd: How to Change Mass Behaviour by Harnessing Our True Nature and the other was Godin's Tribes: We Need You to Lead Us.

Much of the talk of herds and tribes is very positive… the leaders discussed (like in Godin's TED video) are both impressive and inspiring. I'm a huge believer in herds and tribes, but I'm also a bit of a pessimist in people's behavior when it comes to herds and tribes. Those books and the video all speak to when leaders are able to harness the herd for good… but they ignore the dark side of the herd. 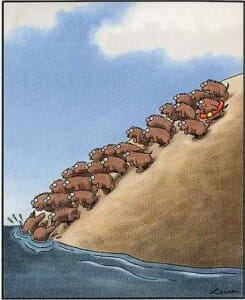 Back to the herd. There are two key problems with the herd:

What inspired the blog post is the current political climate of the country. Take for instance, President Obama. One of the soundbites we're hearing right now and one that will continue to accelerate through to the election is that President Obama said Americans were lazy. The quote is misrepresented but repeated throughout every right-wing political commercial, discussion or debate. Even though it's utilized out of context, leaders on the right use the quote and their herd continues to perpetuate the idea that Obama truly believes our citizens are lazy. That's not what he said.

Before you start thinking I'm only going to pick on the right, I'll add that the politics from the left are just as egregious. Because President Obama is a minority, many on the right have been labeled as racists for simply disagreeing with his politics. That's a tough accusation to defend since it means you simply can't disagree with the President – about anything. This is unfortunate and continues to be pushed by some far-left folks. It really needs to stop since it's unproductive and screaming racism isn't doing anything to help the country. But it's an effective means of separating the herd!

Republicans continue to challenge additional taxes and institution of new programs and expenses in this country because their view is that we simply can't afford it. The riots in Greece and other overseas countries that have been initiated due to cuts in government entitlement programs should be of concern to everyone. But the argument from the left always comes back to “do you care about people or don't you?” If you want to cut programs, you don't care about people. But when we run out of money, who does that help? Naturally, the conversation then moves to getting more revenue (aka:fair share). The herds are split.

I'm really trying to keep my personal beliefs out of the post, and just speak to how our political parties manipulate and use the herd. Worse than lying – or just plain being wrong – is how the herd attacks those outside of it. I guarantee I'll get a few nasty comments regarding this post from one side or the other. When the herd attacks, it's pretty painful and the sheer force or fear of the attack can move the herd in the wrong direction. Most people avoid the herd by not saying anything at all. I don't think that's a good idea. We can point to almost every atrocity in history – albeit war or business, and it typically comes down to a trusted leader who was wrong and a herd that blindly followed due to fear or ignorance. Herds have led to World Wars and the economy toppling.

If you really want to see another political example of this in recent weeks, you need only look at Ron Paul and his treatment by the media and the right wing. If Paul wins Iowa, I've heard on two major news stations state that it “puts the legitimacy of the Iowa caucus into question“. I guess that means Iowa is no longer part of the herd we call the “United States”.

Wow… really? So if a majority of political leaders disagree with a majority of the voters, the problem isn't their view… it's that the people are simply too dumb to make a good decision? Ron Paul continues to get labeled unfairly on many layers… even though there's much evidence to support his opinions and voting record. But the herd doesn't like Ron Paul. He's an outsider and the leaders of the herd are doing everything possible to bury him as quickly as possible.

Another example in this election was a poll that I saw where only 6% of conservative voters said that Donald Trump would influence their vote. I watched two different news stations and both dismissed Trump based on the poll results. But if you stop and think about it, 6% is a huge influence. Many Presidencies have been won and lost on less than that! However, the herd doesn't want Trump mucking things up… so distorting the poll was a much more convenient option.

When I talk politics with folks (aka the herd), I often hear, “He's such a great speaker!” or “He's an a**hole!” as I discuss the current President and the Republican candidates. As soon as I hear words like that, I pretty much go numb because it shows absolutely no insight into the real issue… is our country going to fair better or not under that person's leadership. I could care a less how effective a speaker they are and maybe I'm even hoping for an a**hole next. Sometimes a**holes get more work done.

Last example: My parents recently visited and talked about their social security. They have worked hard their entire life – sometimes both my parents worked several jobs. My Dad also retired from the Navy Reserves. They're both semi-retired and collecting social security. I reminded them why we had social security and how the system worked back then… along with the average life-expectancy and who needed the system. My parents are both very conservative and were pretty honest… they felt they put into the system and were entitled to getting their payout. That pretty much sums up how the herd feels and how the herd reacts to any talk of cutting social security – regardless of whether it's a necessary move to ensure the solvency of the system.

You'd like to think that mistaken leaders will be uncovered and the wisdom of the herd will prevail. I honestly don't have any faith that that will happen. Reality television dominates the airways, more people vote for American Idol than in the election, and the herd continues to vote for their own short-term self-interest rather than what's good for the herd. In my career as a marketer, I've worked for crappy companies that prevailed and fantastic companies that struggled.

It's unfortunate (or fortunate for some) that facts often don't get in the way of an opinion. And when that opinion is perpetuated across the herd, it's even more powerful. Harnessing that power is part of my job as a marketer. We often think about the behavior of the herd now and enact strategies that leverages the predictive nature of the herd to our clients' advantages.I guess that makes me part of the problem.