I recently came across the State of Video 2015 report from Crayon, a site that mentions it has the most comprehensive collection of marketing designs on the web. The 50-page research report focused primarily on detailed breakdowns of which companies use video, whether they used free hosting platforms like Youtube or paid platforms like Wistia or Vimeo, and which industries are most likely to use video. 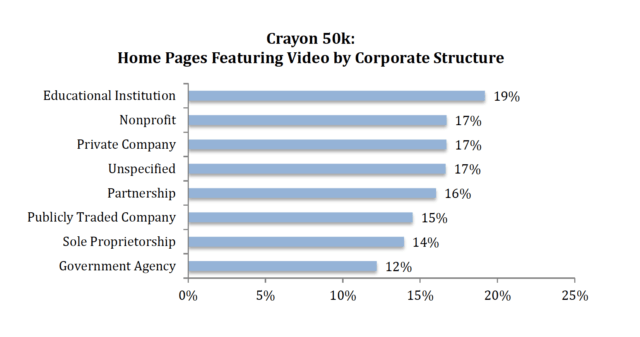 For each of those industries, their potential clients have a strong desire to see what they're getting before making a purchase decision. Just think of the last time you saw a great video for a vacation destination or a restaurant. Didn't you want to go there immediately? Even at our company, we've seen a solid return on investment from featuring a video on our homepage.

The biggest takeaway from this report is that, while businesses are starting to feature videos on their homepage – and seeing positive results because of it – there's still plenty of room to take even more advantage of video and see the impact it can have an companies' bottom lines.

Jeremy is the VP Marketing and Communications at 12 Stars Media and Candidio. They provide both video services and a self-service editing platform for video.