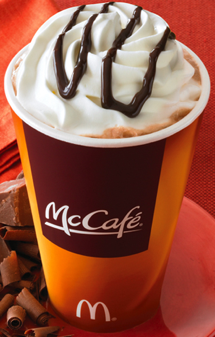 Last week I stopped for a McSkillet burrito on the way to work. I could probably write a post just on how much I love those and Qdoba breakfast burritos, but I’ll spare you. While I was at McDonalds, my curiosity got the best of me and I ordered a McCafe Mocha rather than stopping at my favorite coffee shop.

Colorful, sophisticated signs and packaging with earth tones surround you and make you feel as though you’re stepping up to a European cafe. You’re not, though. I watched carefully as the person behind the counter pressed the right buttons, stirred the contents, and capped the drink off with whipped cream and a drizzle of chocolate.

I got to the car, took my first sip, and… blech. I’m not sure what happened, I believe there was a malfunction with the machine or something, but it tasted like bad expresso shots covered in whipped cream. I can almost stomach any coffee (I was in the Navy for goodness sake), but I had to throw it out. Of course, their team wouldn’t know if there was a problem either – any less than they’d know good ground beef. 😉 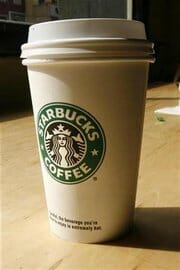 We have a Starbucks downstairs from my work, so it’s difficult for a coffee hound to pass up. I’m especially fond of their peppermint syrup… just as our ancestors found out that Coca-Cola had cocaine, I fear that we’ll someday find out that Starbucks Peppermint has something illegal in it.

Starbucks has a very clear, clean logo that used to tell folks around you that, “I have so much money that I can spend $4 on some burnt beans.” (Some of my friends call it Fourbucks). Alas, the cultural icon that was Starbucks has begun to fade. I rarely hit the long lines and can pass up a Starbucks as easily as a Gas Station with a coffee stand. The cup is still elegant and distinguishable, though. 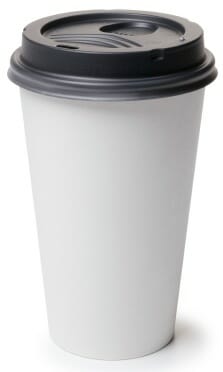 To the left is, perhaps, my favorite coffee of all. My good friends Jason and Chris run a great coffee shop, The Bean Cup around the corner from my home.

The coffee is imported from a coffee roaster out of Hamilton, Ontario. Every sip, even if it’s decaffeinated, is still very smooth, rich and creamy. It’s hard to explain the difference that a properly roasted, ground, tamped and steamed bean can produce such an incredible liquid and sweet foamy surface. The baristas at Indianapolis’ best coffee shop carefully measure and time every shot to ensure its flavor is maximized. Often, I see them dump and retamp beans until they get the right shot – sometimes humidity can play havoc.

They don’t cost as much as Starbucks and they’re so much better (exponentially better than McCoffee), yet the cup is plain and white. Nothing special… except for what’s inside. That’s what I came to buy, isn’t it? I do pay for the experience that the shop has to offer, too! Plenty of room, free wireless, and some comfortable seats.

Oh, the lies of packaging! I can’t imagine how much money McDonalds has spent to try to make what’s in the cup look better from outside the cup.