When I first moved from Virginia Beach to Denver, it was just me and my two kids. It was pretty terrifying… a new job, a new city, my marriage ended, and my savings gone. To save money, I took the light rail to work each day. After a few weeks, I got to having some small talk with a guy on the light rail named Mike. 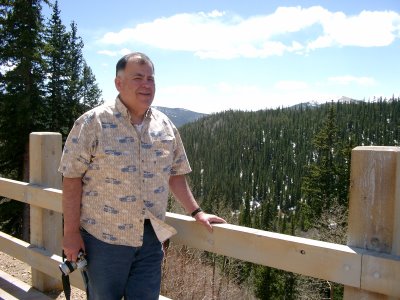 This is a photo I found at Mike's son's site.

Mike was a towering man. I’m a pretty big guy, so maybe that’s why we hit it off. After getting to know Mike, I found he worked as a Marshall that protected the federal justices downtown. With 9/11, Mike had a serious job and he loved the responsibility. His protective spirit didn’t end at the court steps, either. I often found Mike finding a seat on the light rail between a drunk and the rest of the passengers. In the middle of our conversations, I would see that I lost his attention while he watched over other people. They didn’t even know he was there protecting them.

This was a time in my life where I had a lot of questions and not a lot of answers. I began going to Church and one of my first days I looked across the Church and there was Mike and Kathy. I don’t believe it was a coincidence.

Mike took me under his wing and opened his home to me and my kids. We spent quite a few holidays with Mike, Kathy and their (grown) kids. Our conversations on the train were fantastic and some of the fondest memories I have of Denver. Mike loved his family more than anything in the world. It’s not often you see a man of his stature tear up, but all you had to do was begin talking about his family.

Beyond his family, Mike also had an intense relationship with Jesus Christ. It wasn’t something he wore on his sleeve, but it was also never far from a conversation. Mike was one of those Christians who truly was thankful for all that he had been given. I saw a joy and confidence in Mike that you don’t find in many adults, largely due to his faith and his family. Mike didn’t preach, he really tried to live his life according to how he thought God would want him to. Mike just shared his happiness and his experiences in his love of God with you. It was never pushy, never judgmental.

I got a note from Kathy, Mike’s wife, tonight that said that he had passed away in his sleep. I’m in shock. I’m disappointed that I never got to go back and visit Mike and even more sad that I hadn’t kept in touch by phone. Kathy and his family should know that he was an important part of my life. I have no doubt that God put Mike on the same train as often as He did to help me find my way.

I’m forever thankful for Mike, his family’s love, and the incredible memories they gave to me and my family. God bless you, Mike. Rest in Peace. We know you’re home.