I’m not sure if you’ve seen this video yet. It’s not safe for work but it’s absolutely hilarious regarding the topic of major newspapers and traditional news publications looking to increase revenue through the display of native advertising, also known as sponsored content.

What is Native Advertising?

I took away two issues that John Oliver points to with native advertising.

I don’t have any disagreement with John Oliver on this. You have to ask yourself why some publications are flourishing while many traditional media outlets are not. It’s not because people won’t pay for news – I pay for news through a ton of sources. It’s that they put out crap and expect to be paid for it.

In my final years in the newspaper industry, I was totally depressed about the state of the news. While my database marketing department had millions in revenue and every tool known to man, my counterpart – a researcher in the newsroom had a beat up old desktop and no tools other than Google to do his job. He pulled off some miracles and worked his heart out, but I could tell the downward spiral had begun. The irony was the anti-corporate sentiment in articles in the news were probably born out of the industry’s own greed. I clearly remember when we had 40% profit margins and were cutting editorial budgets. Ugh.

Review any social feed of any news station today and it looks like they’re a supermarket celebrity mag. They spend an inordinate amount of time on cheap snippets of weather forecasts, sports scores, and crime all smacked into a 30 minute or 60 minute window with no depth whatsoever. Of course, this is information that you can get from any number of sources. Most likely the same sources the reporters are getting it from.

This year I was proud to have been on the local news to announce a regional fundraiser. I spent about 20 seconds with the reporter on the couch as we were going live with the segment. There was no background interview, no insight, no depth and no passion in the story whatsoever. I was herded into the studio, did the spot, then herded out. It’s not that my story was amazing, but a few days of digging could have produced countless stories that would have touched peoples’ hearts and driven a ton of attention to the channel.

By taking money for native advertising, these news outlets aren’t telling us they can’t be trusted… they’re telling us they don’t even trust themselves. They’ve given up.

The Demand for Information is Up

The sad irony, of course, is that these are formally trained and talented journalists that research and write better than anyone on the planet. The demand for content is skyrocketing while newspapers and television stations are trimming their budgets more and more.

The problem is not that news can’t sell, it’s that news outlets are not providing the value that people expect. News is now a propaganda outlet for politicians, it’s anti-business in an economy when we need enterprise more than ever, and it’s pro-spending when we need to trim our belts. Those directing the news aren’t just violating the trust with native advertising, they’ve blown their trust with the public over their shoddy, shallow and yellow journalistic ventures.

The reasons why I read a technology blog or listen to a corporate podcast instead of traditional media is because the content is produced with professionals who understand the material intimately, it’s timely as they make the discovery, and it’s raw and often uncensored to get at the truth. I watch the news speak about technology and I often hide my face in shame at the lack of knowledge. I can also use social media to vet the information from corporate outlets and get different perspectives from groups of well-informed professionals that I network with. This enables me to use all the information I can find and develop my own understanding rather than the misinformed opinion of a rushed journalist.

Side note… remember when the news industry was trying to destroy bloggers and blogging? They hated the industry and even fought to remove their protections under freedom of the press. When they lost, newspapers turned to blogging and now they’re getting into content production for businesses? Wow… talk about a one-eighty!

The largest negative impact of negative advertising for news sites are credibility. Contently surveyed U.S. web users to identify whether or not they would trust a site that ran sponsored articles: 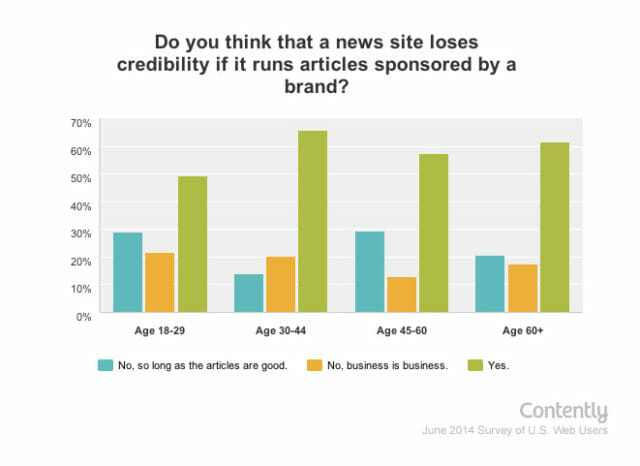 This could be a problem for businesses as well. In all the work we’ve done with clients online, promoting corporate blogging and social media – the entire epicenter of all of it has been to gain the trust and authority of the reader. Without trust, there are very few people who will pick up the phone and wish to do business with you. Trust is everything and this native advertising is the very definition of deception… adding a little flag on it that says sponsored content doesn’t change the fact that it’s there to deceive.

We don’t have paid content on this blog. We tested it in the past and it both failed miserably as well as hurt our reputation. Now we have overall site sponsors that we promote dynamic ads for and we even mention them from time to time in our content – but with overly cautious disclaimers of our monetary relationship. We also don’t make any promises to our sponsors on what we will or won’t write about them.

When we get a guest author on board, our first directive is that if they’re getting paid in any way to place the content, we’ll fire them, delete the post, and may even take legal action. They’re told to sell in their author bio, never in the content. We want our posts to be informative – surrounded by business opportunity but not trying to drive it deceptively. Hmmm… remind you of the old days of traditional news?

If our clients need help in producing content like infographic and whitepapers, we will create it and publish it on their site, promote it on their networks… and then we may display it – with disclaimers – from our site. Even our site mention will push people back to their site, though. We’re not trying to compete for eyeballs, we’re trying to provide value to our readers. There have been dozens of pieces of content produced for clients that we’ve never shared here.

We’re not even a news outlet and we recognize the responsibility we’ve been given through the growth of our audience and community here. But then we don’t have to pay for and manage a bureaucracy with multiple layers of management, either. Perhaps the value of the news that these outlets are providing is simply being adjusted for it’s true worth to the public. Perhaps they need to look to bolster their editorial staff and focus on providing quality instead of increased revenue. Revenue comes with trust.

Mopub shared how quickly native ad spend is on the rise within their own network: 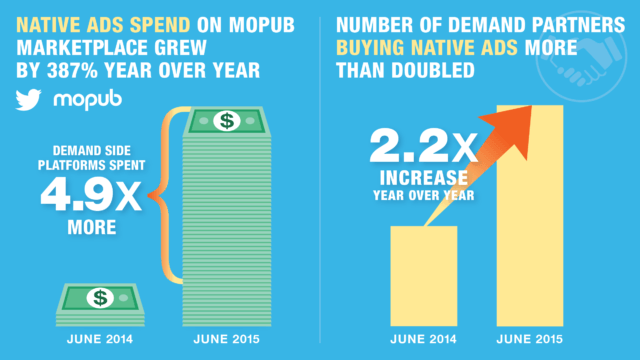