The most effective Super Bowl commercials may not be the ones you think. While our ability to collect data is growing, our ability to understand data is still catching up. At Perscio, our team of data scientists did a deeper analysis of Twitter activity during the Super Bowl and found that the most popular commercials aren’t necessarily the ones getting the best results. Also, at the end of this article is an interactive view of our data!

Most people by now are familiar with the notorious Nationwide ad where they kill off the kid by the end. This shocking and rather odd decision led to a huge burst of reaction on social media. Several marketing companies have already released most tweeted results showing Nationwide as the winner, but we were skeptical.

Our thinking is that while the negative response lead to lots of tweets, it probably isn’t the kind of activity Nationwide really wants. In the end, it was probably Microsoft who won social media during the Super Bowl.

How The Study Worked

The Raw Numbers – Brands by Volume 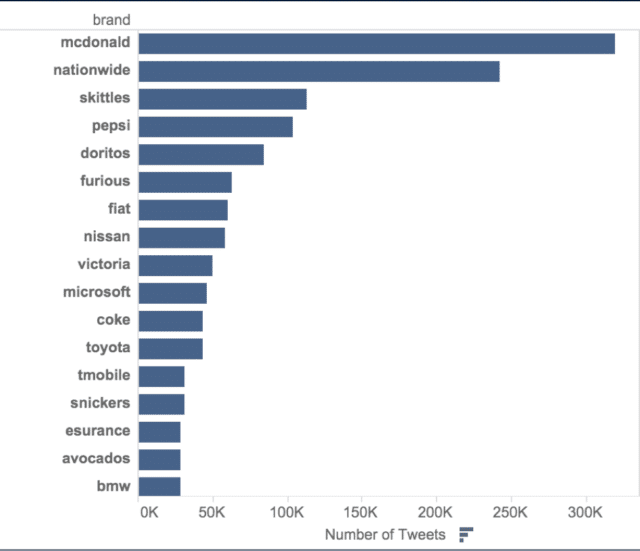 Exhibit A – Showing most tweets in “natural language”

In Exhibit A, we first want to note that McDonalds won on pure volume. However, our data scientists noted that going into the Super Bowl, McDonalds already had really high traffic.

So adjusting for a base-line of pre-game traffic, Nationwide can be counted as the winner of volume from their commercial.

Also in Exhibit A you can see that close to Nationwide is Skittles, Pepsi, and Doritos. Microsoft is actually farther down the list, so you may be wondering at this point; why would we think Microsoft won? Well, that’s because there is a BIG disconnect between the way people talk, and the way social media functions.

In order for a business to turn a tweet into something tangible, there has to be an action of some sort. For Twitter, the most obvious actions are:

So we looked again at the data to see who got the most actions from their Twitter volume and the top 5 are:

So here you see Microsoft already doing better than Nationwide in actually getting the most actions. We also did a visual check of the top URLs in the Twitter streams, and Microsoft has the most links going back to their own domains. But what about sentiment? Who is getting the most love on Twitter? 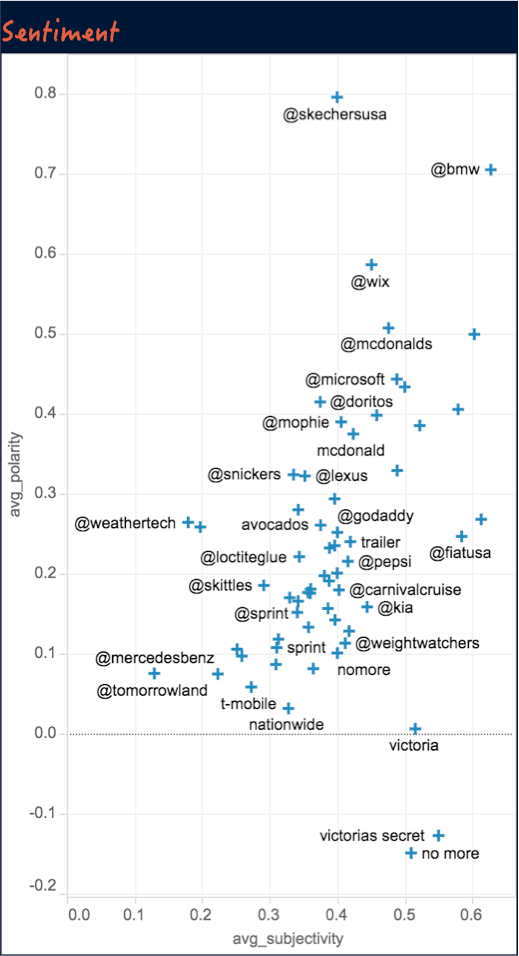 In Exhibit B – Accounts and top natural language searches mapped out according to polarity (positive or negative) and subjectivity (fact or opinion).

In Exhibit B, you can see all our @accounts and top natural language searches mapped out according to polarity (positive or negative) and subjectivity (fact or opinion). The most positive brands were @skechersusa, @bmw, and @wix. Our most negative brands were victorias secret, t-mobile, and no-surprise nationwide. So you can clearly see that the majority of traffic for nationwide was negative.

For having high volume, McDonalds and Microsoft were the top of the top. This means they aren’t just getting a lot of traffic, but the conversation is mostly positive.

So if you add it all up, Microsoft is the only top contender doing well on all three metrics: volume, engagement, and sentiment.

Of course, and we want this to be clear, while we think Microsoft won the Super Bowl commercial contest; McDonalds appears to win social media, all the time.

Perscio is your business partner focused on creating Big Data opportunities. Our unique expertise allows us to bridge the gap between the technical world of Big Data and the practical aspects of business strategy. We work with you to define a strategy, choose products, implement solutions and build the organizational competence to analyze and visualize data. Learn more and download our whitepaper, There is a Big World of Data Out There.

Chris is the Marketing Director of Perscio, a business partner focused on creating Big Data opportunities for their clients, where he has developed the branding and messaging from the ground up, from logo to sales funnel.