If I were to ask you which source provided more traffic to your site, Twitter or Facebook… how would you determine that? The majority of web analytics users would log in and look at their referring sources and come up with the value. That's a problem.

Some companies simply add “twitter.com” as a referring source and think that it does the trick. Not the case. The count of referring visitors from twitter.com is only those people who have clicked on a link from an open twitter.com web page and made it to your page. If you don't believe me, take a look at a segment below from hootsuite.com and from twitter.com: 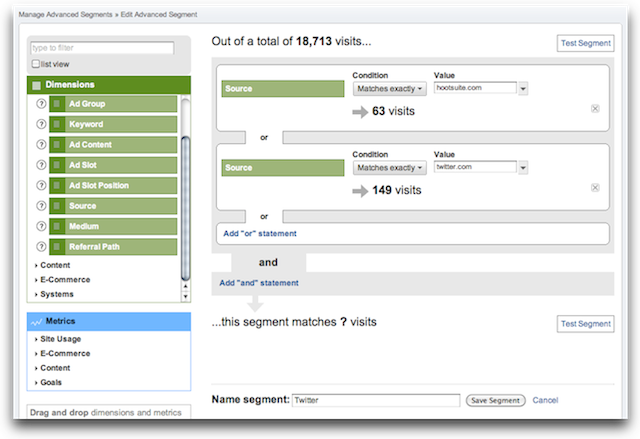 Ouch. And it's only getting worse.

Applications dominate the twitterverse and are beginning to pop up with Facebook, too. As we all move to mobile, we're all working with mobile apps and connecting. I utilize Adium to chat on Facebook… so anytime I click on a link that a Facebook friend sends to me, the traffic isn't referred to Facebook at all. It shows up as a direct visit with no referrer.

As a result, companies are underestimating their social media traffic by relying on incomplete analytics. Since the majority of the online world utilizes Google, it's not going to get any better. It's doubtful Google will build an analytics gateway to its friends at Facebook or Twitter. So what's a company to do?

First, you might want to invest in a third party analytics tool. My client and friends at Webtrends are working on a partnership with bit.ly… a move that I'm confident will shake up the analytics world.

Without investing in a new analytics platform, there are still things you can do.

If you push your blog feed to Twitter utilizing a tool like Twitterfeed, you can append Google Analytics campaign code and shorten it with your bit.ly account automatically. This leaves no question that the visitors came from you pushing your feed via Twitterfeed.

I've not attempted to hack the Facebook like button code to add on a querystring… I'm not sure of the impact at this point, but it would be possible. It could run into trouble where you have two distinct URLs counted as liked, though… one with the campaign code and one without.

The bottom line is that your site may be seeing a lot more traffic than you think from social media sources. Mobile apps and desktop applications skew the values of those visits and it takes some extra work to help determine where those visitors are coming from. Until we see some significant improvements in analytics, you must pay attention to this discrepancy.