The old adage of broad-reaching media is that eyeballs = money. Flawed logic that is commonly accepted today is that more eyeballs = more money. We’re seeing social media sites like Digg, MySpace and Facebook plateau and even shrink in participation. 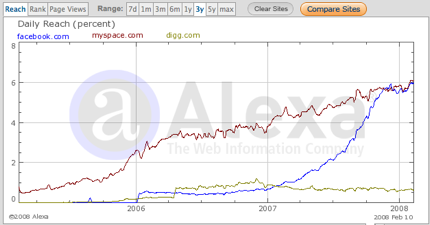 I’m confident all of these sites will push back and tell you that they are growing in the number of eyeballs. That’s actually not good news. If participation is plateaued or waining and the number of users is growing, there’s a message in the math! The average user is spending less time… or an increasing number of users are abandoning the service altogether.

The temptation to grow huge is always there… more eyeballs can bring more money. However, the longterm risk of more eyeballs can bury your site’s popularity, or make it a huge target for SPAM. These sites should have been more prudent in analyzing the growth of their site versus the impact on existing users. Had they done so, they may have figured out that, to maximize profit, there was a right size to their site to not extend beyond rather than keep looking for growth.

The problem is pretty basic, it’s urban blight. When I lived in Phoenix, Arizona for a year I read a lot about the urban blight that was taking place. Back in the late 80s, the suburbs of Phoenix were growing at such a demanding rate, that no one could keep up with the core – downtown. As neighborhoods became overly packed and traffic became a mess, people moved to newer neighborhoods.

These new neighborhoods had new schools, new homes, more land and trees, and great neighbors – not to mention clean air and lots of room to move around. You became closer to your neighbors… since they didn’t move in and out all the time… attending social events and talking over the fence.

Applied to Social Media, I believe we’re seeing the same thing happen. The core of Digg is experiencing blight right now – the users that helped create the service that became so popular are becoming disenchanted and are searching for alternatives. With MySpace, the answer was Facebook. Now Facebook has grown as large as MySpace and the same plateaus are occurring – this time at rapid speed.

Where’s everyone going? I think the answer is the onslaught of micro-networks popping up. People are abandoning downtown and moving out to the suburbs.

The Message for Marketers

IMHO, this is great news for Marketers. Utilizing broad-based advertising techniques that reach a lot of eyeballs (but little buyers) is becoming less popular. Finding micro-sites that meet the niche you wish to reach is becoming more popular. Personally, I’m getting many more solicitations on advertising revenue for niche sites I run, like Navy Vets.

The time spent applying marketing campaigns across all these sites may make up the difference in cost of just the ol’ batch and blast techniques, though. Fishing with dynamite was easy, but is proving to be a harmful tactic on the Internet. This requires marketers to change their tactics, requiring them to work harder on the right message at the right time – as well as building a great online presence with an outstanding reputation.

No one said it was going to be easy!