This afternoon I had a presentation with a regional law firm on Social Media. It was great to see an organization that had the foresight to expose its employees to new media. The world is definitely changing but there’s still a misnomer out there that social media is ‘what the young folks are doing’ and it’s still not getting taken seriously.

A decade ago, I worked with newspapers and watched them silently watch eBay and Craigslist. They thought it was for geeks and young people as well… until the billion dollar rug was yanked out from under them. In fact, it wasn’t really yanked, it was gently pulled.

Many newspapers wrote in awe of the growth of these technologies, unfazed that it would chip away at their own industry. Many newspapers had their toes in the Online Industry (InfiNet was one that my parent company worked with) but they failed to pull the trigger when they could have to make the necessary investment… even when they knew there was still time to do so. The corporate profitability lines had been drawn, and no manager was going to take 50% off the margins to go after this new world.

Newspapers had the coverage and the monetary resources to battle the losses. They even had the advantage of a regionally trusted brand. Rather than adapt, though, they pointed fingers and swapped one manager who didn’t understand with the next that didn’t understand.

In the decade I was at the newspaper, I don’t ever remember a session where someone came in and discussed the new technologies and asked or discussed how they could be leveraged to improve efficiency or maximize profitability.

It was refreshing today to see a local firm with a different outlook!

The Burj Dubai – a Solid Foundation 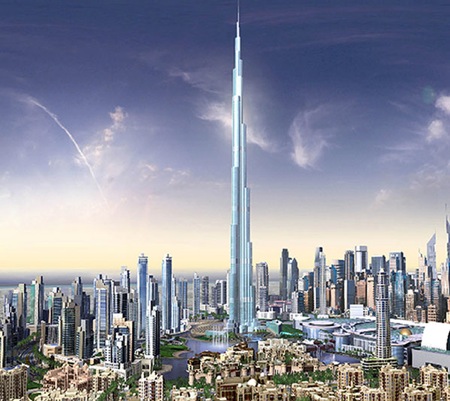 One of the slides in my presentation is a great photo of the Burj Dubai, a building under construction in the United Arab Emirates that will tower above all other buildings. It’s scheduled for completion by the end of next year and is currently estimated to have 162 stories.

162 stories is the latest estimate, though. It’s rumored that the goal has changed over the years, partly due to possible engineering estimates that underscored the strength of the foundation and how tall the building could be raised to.

One look at the building and you can begin to understand why. The foundation of the Burj Dubai is absolutely mammoth, and the spire thins as it goes up.

Social Media – A Foundation in Business

Social Media is your company’s opportunity to begin building a foundation for incredible growth over the next decade. Establishing an online brand through social media and social networks lays the groundwork for established connectivity.

Much like a web, starting today will provide you with a huge net to capture a huge volume of business in upcoming years. The landscape is changing. Search engines – even Google – will lose some of their grip on how we navigate the web as micro networks continue to rise and flourish.

The earlier your company adapts to these technologies, the better positioned it will be when your livelihood depends on it. The firm I spoke to today has exceptional opportunities. They have talent that has established authority and results in burgeoning cases like non-compete clauses and patent law.

If their staff were sharing those experiences online today and establishing online authority, especially geographically, it will provide them with the networks to grow their business tomorrow. It’s an exciting time for this firm in particular – they’re a firm that is open-minded, large enough to have an impact, but small enough to maneuver and adapt in this space quickly.

I hope they take advantage and recognize the opportunity that a few of them identified right there in the room!