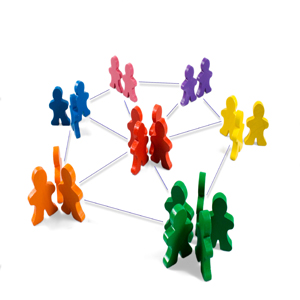 This afternoon I was invited to an incredible lunch and discussion with Indiana Business College Harrison College. Indiana is well-known for having some of the finest schools in the country, and in the world, but the folks at Harrison recognize that we’re in a rapidly changing world. They are making an aggressive push to ensure that they will stay ahead of the curve.

As we were talking, I realized that there is one glaring tool missing from the student curriculum nowadays. Simply put, it’s how to network (with and without technology). Most students are required to take classes such as Public Speaking by the time they graduate, but rarely are they educated on the importance and power of networking.

I have close friends of mine that express regret that they’ve not attended regional events and stayed connected with previous leaders they worked with. Years later, they’ve found that they disappeared from the spotlight and now need to ‘catch up’ to gain traction to get the job or opportunity they are looking for. You simply can’t get that time back!

The majority of my time spent outside my primary job is spent networking. Networking is definitely #2 on my list of how I invest my time (#1 is executing well on my current job!). Close at #3 is finding the time and opportunity to work on new ventures or side-jobs. That’s right – I actually put networking as a greater priority than making a second income!

The reason is simple – networking has resulted in me gaining my primary job as well as led to all of the secondary opportunities. Without the network, I wouldn’t be where I am – and wouldn’t have the opportunities opened to me to go where I’ll be next.

Networking is an Investment

Networking is an investment. On the surface, it may seem like you are spending time and energy supplying consulting, services or extending your network at no cost. However, through these relationships you are gaining peoples’ trust and building authority on the subject at hand.

Case in point, I took the day off of work today. I spent the day talking social networking strategies with Harrison College, consulting BioCrossroads on building their online presence, and attending an Indiana Entrepreneur Steering Committee meeting – all through my network relationships!

If a school is demanding public speaking as a required skill, educators must give networking the attention it deserves. Students must be educated on finding networking opportunities, how to tend and nurture their network relationships, cultivating an online presence – as well as how to capitalize on all of the above. If you can’t fill an accredited course on the topic, I look forward to seeing universities and colleges developing workshops on the topic.