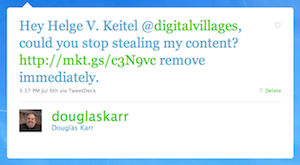 Earlier this week, some of you noticed that I went after a blogger who was stealing content from Martech Zone. At times, this happens as someone gets excited and decides that they’re doing me a favor by extending my audience. Not the case. This joker even published the post out onto a third-party site with his own name as the author. Not acceptable.

This guy posted the stolen post on his blogger blog. That wasn’t smart, since Blogger does comply with Digital Millenium Copyright Act (DMCA) take-down notes. I filled out Blogger’s form and received notice today that they had removed the stolen content.

I am very appreciative of Blogger’s support on this!

It’s important to note that I purposely leave a breadcrumb trail in my blog posts. Very seldom do these thieves rewrite or copy the content and paste it. Instead, they write algorithms and grab your RSS feed and simply push it out to their blog. Most of the time this happens, the blogger isn’t aware. I am. One of the reasons I developed the PostPost plugin was so that I could edit and add content to my footer. Every post on my RSS feed has some sort of link back to my blog.

Next, I set up Google Alerts with my domain as the search term (as well as some others I can’t tell you about). Now – each time someone links to my blog, I get an email alert with a chunk of the post. It’s instantly recognizable when I read my content in the body of the alert.

Perhaps one of the sneakiest things I do is that I instantly purchase images from iStockPhoto for all of my posts for the next week or so. Since I pay for the photos, it’s legal for me to use them but no one else. If you’re stupid enough to be stealing my content, you’re probably publishing these purchased images as well. Now I have a major corporation hellbent on fighting copyright theft on my side. As soon as I see the posts published, I contact support through iStockPhoto and report each of the posts, the images, their source and that they were stolen.

To be honest, I’m not sure if iStockPhoto has pursued any of the cases… all of them have taken down the posts when I’ve found them and told them. There’s still some guilty little pleasure in it for me, though. I don’t want to be on the wrong side of a copyright suit with iStockPhoto. They’ve got deep pockets and a lot of lawyers.

I’m not quiet about it. I do a Whois.net lookup to identify the hosting company and the person who owns the site. I’ll try to contact the person directly at first. Then the emails go out to the hosting company, tweets get angrier, and Facebook Wall messages get posted. I won’t stop until I begin to get responses back.

As I said before, I’ve never had to go beyond this point. There’s always the chance that someone will steal my content and be offshore, hidden, and virtually impossible to chase. I’ll do my best to report them to the search engines at that point, but I will NOT let them get away with it. You shouldn’t either!