They say “put your money where your mouth is.” Well, word on the street, and perhaps every street in the world, is that Google and Amazon are your money makers when it comes to online retail. Google Shopping and Amazon Product Ads are undoubtedly two of the most dynamic, traffic-heavy paid comparison shopping engines (CSEs) in existence. But everyone knows that. What most probably don’t know are the subterranean levels of the CSE giants: The raw data. The revealing truths.

Which CSE was the top performer in Q4? CPC Strategy compares Google Shopping and Amazon Product Ads based on significant metrics like traffic, overall conversion rate, and average cost per click (CPC). Let’s take a look.

Don’t be alarmed. Amazon’s traffic didn’t just plummet in Q3. Actually, quite the opposite happened. Google Shopping’s traffic was just so high that Amazon’s traffic was relatively that much smaller. Google sent 144% more traffic to online retailers than Amazon did. That’s more than twice the amount of traffic. This is a significant improvement for Google from Q4 2011.

In Q4 2012, Google sent 96% more traffic to merchants than Amazon did. Why the sudden difference? Other CSEs, like Shopzilla and Shopping.com, are catching notice of Google’s huge traffic pool and have begun to advertise products on Shopping. The traffic winner: Google Shopping. 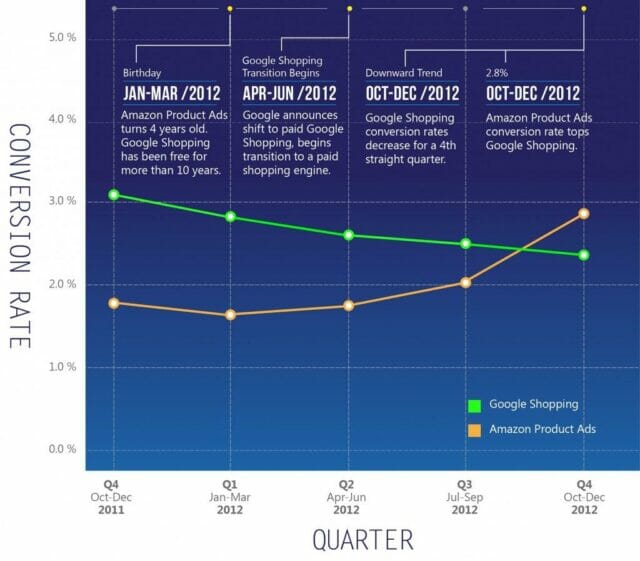 Why the difference? Well ever since Google switched to a paid CSE model, it’s become clear that merchant bids have had an enormous impact on how well retailers’ products are exposed, and consequentially, their conversion rates. The conversion rate winner: Amazon Product Ads.

Cost per click is a pretty new concept to Google. They only officially switched to the paid model several months ago in October, and so we can see that through Q4 2011 – Q2 2012, Google has no average CPC.

While the reality is that I haven’t even looked at other significant metrics like cost of sale (COS), revenues, and engine responsiveness, Google Shopping is still the stalwart here. In the full report (to be released on the CPC Strategy Blog next week), Google has cemented itself as the premiere CSE in Q4 despite being the youngest paid engine.

What does this mean for retailers? Your holiday shopping season strategy, which you should be preparing now, should focus in large part on Google Shopping because it’s the serious contender and money maker during the holidays.

Andrew is CPC Strategy's Director of Marketing. In late September 2010, Andrew finished writing the first-ever Merchant Comparison Shopping Handbook which provides a comprehensive overview on how to start and manage an effective comparison shopping campaign. Today Andrew spends most of his time consulting medium and large online retailers and online marketing agencies, and also writing and directing the CPC Strategy Blog.