Nobility is the First Estate, the Church is the Second, the People are the Third… and Journalism was always thought to be the Fourth Estate. As newspapers began losing interest in being a watchdog for the people and – instead – focusing on profitability, publishers began looking at journalism as the filler between advertisements rather than the purpose in life. 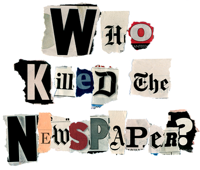 We continue to see the demise of newspapers even though the talent of journalism never left – only the profits did. The newspaper death watch continues. I’m saddened to see so many talented investigative journalists losing their jobs. [Image from The Economist]

There was a journalist at a recent event who I spoke to and she asked me what in the world she would blog about if she were to start. I told her that I looked at blogging and journalism as two very different styles of communication. In my opinion, a blogger is one who shares his own talents or experiences online. Blogging is enormously popular because it cuts out the producer, the editor and the journalist… and puts the audience directly in front of the expert.

So what would a journalist blog about?

I recommended that she blog about journalism. Journalists are incredibly talented and tenacious individuals. They craft their stories over time, with a lot of hard work and digging to uncover the facts. Although bloggers make the news from time to time on being a watchdog, I don’t believe there are even a handful that could match the talent that journalists have – not just at writing, but wading through the mud to get to the truth.

If some journalists would share their knowledge of their craft through a blog – and even some insight on what stories they’re working on – and offer opportunities to train and enlist bloggers, there may be hope for the Fourth Estate to live on. I hope that she does start a blog and begin educating the rest of the blogosphere on how we can become better watchdogs.

It’s a scary world without the Fourth Estate. It’s obvious that our mainstream media gave up their position many moons ago as dollar signs, shareholders, and political influence overtook the importance of great journalism. I was there when we started advertising the newspaper for how many coupons were in it and not the talented journalists that you were provided access to.

Geoff Livingston wrote earlier this year that citizen media was The Fifth Estate. Perhaps that’s true, but I’m not sure we’re in any way qualified to take on such a role or responsibility.