This is an advertisement from May 1916 edition of Popular Mechanics from AT&T speaking to potential telephone subscribers.

I often wonder how difficult it was to overcome the fear and trepidation such technology must have caused at the time. I also wonder how it compares to social media adoption and the Internet today. 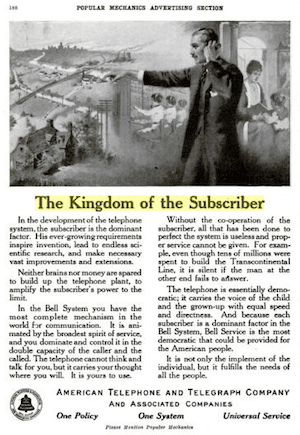 Telephones, like the Internet, significantly changed lives. In 1926, the Knights of Columbus Adult Education Committee even posed the question, “Do modern inventions help or mar character and health?“

It seems that this ad could easily be republished today, with the Internet queued in:

In the development of the Internet, the user is the dominant factor. Their ever-growing requirements inspire invention, lead to endless scientific research, and make necessary vast improvements and extensions.

Neither brands nor money are spared to build up the Internet, to amplify the user’s power to the limit. In the Internet you have the most complete mechanism in the world for communication. It is animated by the broadest spirit of service, and you dominate and control it in the double capacity of the user and the data provider. The Internet cannot think or talk for you, but carries your thought where you will. It is yours to use.

Without the co-operation of the user, all that has been done to perfect the system is useless and proper service cannot be given. For example, even though tens of billions were spent to build the Internet, it is silent if the person at the other end fails to use it.

The Internet is essentially democratic; it carries the voice of the child and the grown-up with equal speed and directness. And because each user is a dominant factor in the Internet, the Internet is the most democratic that could be provided for the world.

It is not only the implement of the individual, but it fulfills the needs of all the people.

A century later, and we still live in the Kingdom of the Subscriber!