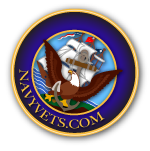 A few years ago, I purchased the domain NavyVets.com. I didn’t have any time to actually work on building out a site, so I put the domain up on Sedo.com to see if there was any interest in it and to get a little bit of ad dollars. Little basically means nothing… for the thousands of hits each month, I was probably only getting a penny here and there.

With social networks on the rise, I began to test out different social networking packages that I might install on the site. I loaded up Elgg but it wasn’t the easiest package to customize and get working.

About that time, I began working on a logo for the site. I basically took the USN emblem and, using Illustrator, separated all the layers and added some dimension.

A few days ago, I started to take a look at Ning. The first time I saw Ning a few years ago was at the first Mashup Camp. It was very intriguing… software that allowed you to write custom code on top of their platform… not really a plugin, but much more robust.

Ning has built a fantastic social network that’s easy to open right out of the box! In fact, it took me much longer to build the logo than it took to get the social network up and running!

I did opt in for some premier ala carte options – private domain, my own advertising, and removal of all the Ning Bling. I think it’s looking good! Now I just need to find some more Vets that are interested! I think it’s a pretty cool story – a Navy Veteran social network… owned and operated by a Navy Veteran!