About 6 years ago I bought an ATI Television card for my computer. I was working on side projects at night so I would bury myself in my office and catch up on television while working. This was before the day of dual screens, but it did a great job and I could watch it in a small screen in the corner of my desktop.

Times haven't changed much to tell you the truth… I've been waiting for quite a while for a breakthrough and it seems to be now stirring. First, I loaded up Democracy Television. It worked much like a Feed Reader and introduced me to Geekbrief TV… watching geek technology stuff is so much easier with Cali Lewis talking about it! The problem I kept running into with Democracy was that it wouldn't track what was watched and unwatched well. As a result, I could never figure out which episodes I was on. Good bye Democracy. 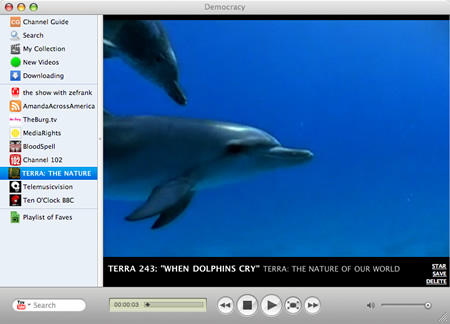 A few days ago, I got an invite to Joost. Wow! I loaded it up and was instantly impressed. The usability of the application changes between full screen, window, and small screen mode – incredibly convenient and well thought out. As well, I love how many of the menu items appear and disappear with natural mouse interaction. The menus also make great use of opacity as well, so you can continue watching and listening to the show in the background without interruption. This is definitely going to be a hit. 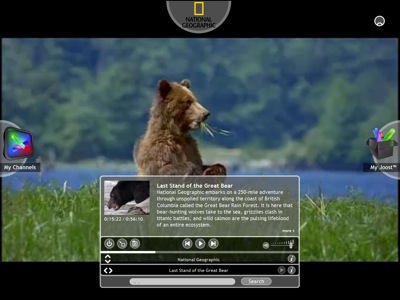 After assisting some friends with a website they were building for a client, they surprised me with an AppleTV. I was shocked at the generosity… and in geek heaven. I told them that it was way too much… and I would never give it back. 🙂 The AppleTV isn't really watching television on your computer… it's more like watching computer from your computer on a computer for your television. Huh? Imagine Ipod for Television and that equals AppleTV. The interface is just like using iTunes or an iPod and you can synchronize with your PC.

What I'd like to learn is how I can simply dump my media library from my network drive onto the AppleTV without having to do any syncing. I have a large music library on there and all our photos. I don't want to have to have them in a local iTunes library… I just want to port them over. The other thing I noticed was that you can only connect with a single iTunes package at a time. I can't wait until this is hacked… I'd like to use my AppleTV as a shared music library for the entire household (2 Macs, 2 PCs). I did notice that someone already hacked the AppleTV to run OSX… hmmm. I'm keeping my eye on Apple TV hacks.

Or perhaps Joost will somehow hookup with AppleTV? Who knows… the dust will be settling for a few years on this explosion – but I can't wait to see where it takes us.

Coming down the pipe is also more Add-On options for browsers. Hat tip to Scoble, ABC just launched their new television browser and … WOW. The definition is incredible and the interface is quite nice. Now if they could just get some shows worth watching! 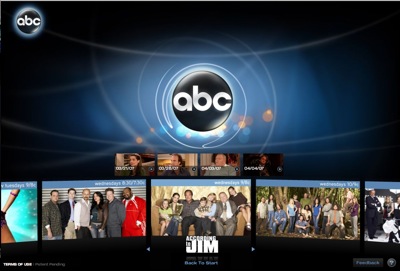