In the study we analyze the best shopping sites for ecommerce merchant traffic, revenue, conversion rate, cost of sale, and cost per click rates, and total them to determine the heavy weight champion CSE.

Below is a brief overview of the Best Comparison Shopping Sites Report in 2012: 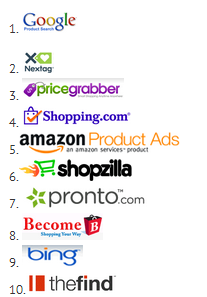 Google Shopping is the reigning top CSE for both Q1 2011 and Q1 2012, and has been for some time. Although Shopzilla beat out Google for overall traffic in 2011, and Amazon Product Ads nosed its way to the top spot for 2012, Google consistently generates a large amount of traffic, and dominated in both quarters for overall revenue.

Nextag brought home the second spot for overall CSE quality for the second year in a row and secured the top spot among the paid comparison shopping sites for 2012. While Nextag’s overall traffic decreased from last year, it is still the second largest revenue driving engine (after Google), for both 2011 and 2012. Nextag also significantly improved in terms of conversions and cost per click (CPC) rates for 2012.

While Shopzilla took the top engine ranking spot for 2011, Pricegrabber nosed out the engine in Q1 2012. Although Pricegrabber’s COS and CPC rates decreased, traffic and revenue stayed fairly constant for both quarters. 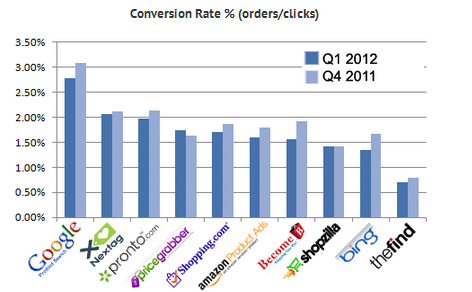 Google Product Search was the second highest traffic generating engine for 2012, and the largest source of revenue for merchants. Consequently, for both 2011 and 2012, Google took home the gold for Conversion Rate in our rankings.

Right behind Google in revenue, Nextag is the second highest converting engine for merchants in 2012.

Although a smaller engine, Pronto packs a strong punch for merchant conversions, rounding out the top 3 engines for conversion rate.

Best Cost of Sale (COS) Sites 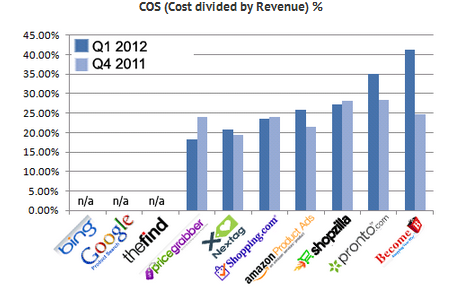 Following the free CSEs, Pricegrabber got the top spot for best engine in the cost of sale (COS) category. It is also among the engines which decreased in overall COS from 2011 to 2012.

Although Nextag’s COS actually increased for 2012, it is still the second best choice for shopping engines for COS.

Rounding out the list, Shopping.com beat out Amazon Product Ads for the third lowest COS engines.

Movers and Shakers for 2012

Shopping.com bumped its way up to the fourth overall engine ranking spot for 2012, formerly having come in 6th.

Pronto went from last in the overall rankings to 7th place for 2012.

*Google Product Search will officially be Google Shopping in October, learn how to get ready here.

Click the following link to check out the complete study on the best comparison shopping sites.

Andrew is CPC Strategy's Director of Marketing. In late September 2010, Andrew finished writing the first-ever Merchant Comparison Shopping Handbook which provides a comprehensive overview on how to start and manage an effective comparison shopping campaign. Today Andrew spends most of his time consulting medium and large online retailers and online marketing agencies, and also writing and directing the CPC Strategy Blog.