This week was a real challenge with work. I'm sure I worked upwards of 100 hours – and didn't come close to putting a dent in my list of things to be completed.

For sanity's sake, I often try to break out things that I must get done and do something totally different. It's part of my personality – my friend Pat calls it my mistresses. 🙂

A week or so ago I met with a friend of mine to discuss building out a new site but use Twitter's API to really make a splash. My new mistress is If Suck.

I needed to learn Twitter's API, first, though. This weekend I did just that. If Suck is a quirky little search application that will search for anything that sucks using Google. The cool part, though, is that it actually maintains the statistics on what people say sucks! 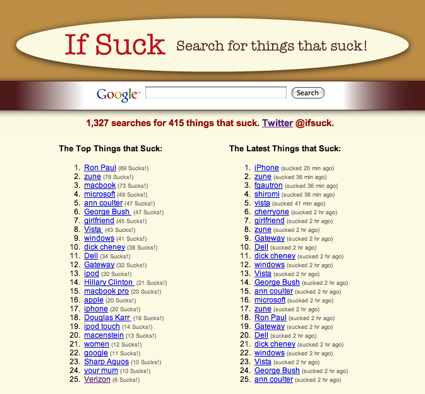 The easy part was making it a search engine for things that suck, I just concatenate “sucks” on to anything you enter using JavaScript. I integrated Google Adsense for search on the results screen. I don't know that it will result in any income, but it's a great experiment in human behavior.

Visitors, for the most part, are behaving well. I have started a filter list for words and phrases, as well as a filter list for those IP addresses that won't stop being rude. I also appreciate the humor that visitors have – I'm right between the iPhone and the iPod Touch. (Improved from being between Ann Coulter and Hillary Clinton earlier in the weekend.) And of course, the original you suck pops up from time to time.

Posting to the If Suck Twitter account was a little more difficult. But the most difficult was building a means to pull the Twitters that other people write back into the If Suck web site. To do it, I have a Cron job that checks the Twitter API each second and records verifies each of the Tweets back into the site, recording any new ones.

If you wish to Twitter something that you think sucks, just throw a tweet to @ifsuck. If you want to watch what sucks throughout the day and for all time (Ron Paul is #1), then visit the If Suck.