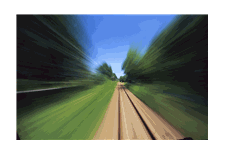 Yesterday I had lunch with a good friend of mine, Bill. As we ate our fantastic chicken tortilla soup at Scotty's Brewhouse, Bill and I discussed that awkward moment where failure changes into success. I think truly talented people are able to visualize risk and reward and act accordingly. They jump at opportunity, even if the risk is insurmountable… and it often leads to their success.

If I'm losing you, stick with me. Here's an example….

Which company is right? Company A takes massive risks with the contract and the client. They are risking their reputation in the industry as well. In fact, there's probably a good chance that they'll get most of the work done but not all of it. Company B never even makes it to the table, and the fact that they didn't get the contract could put them under before Company A ever finishes.

In the past, the conservative engineer in me would have snickered at Company A and I wouldn't have any respect for them over-promising and under-delivering. But times have changed, haven't they? As corporate consumers, we tend to be more forgiving to companies that can't make deadlines or come up short-handed on features. We make do with what we have.

IMHO, Company B doesn't stand a chance nowadays. I am starting to believe the ability to get in the sale early and be flexible on the output is what's going to make you successful. If there's a chance you can succeed, you almost have to always try. Otherwise, the opportunity is going to pass you by.

This is true with jobs, this is true with contracts, and it's true with marketing. If you wait to design the perfect campaign, you'll never have the opportunity to launch it. There is an appropriate margin between perfection and speed. If you can deliver less, but deliver it more often, you'll take the business.

If I were to make a comparison, I'd have to take the obvious, Apple versus Microsoft. Vista was a huge release years in the waiting. Leopard, on the other hand (which I pre-ordered yesterday) seems to be a great feature-rich enhancement to OSX. Microsoft launches the XBox 360, a full-multimedia gaming system with all the bells and whistles. Microsoft launches Zune, a very nice, large-screened media player that's barely scratched the market. In the meantime, Apple launches the iPod, iPod Shuffle, iPod Nano, new iPod Nano, Mac Mini, Cinema Displays, Appletv, iPhone, colored iPods, the iPod Touch, iMac, OSX Leopard… are you starting to see what's happening?

Microsoft has massive, slow cycles with shallow highs and very big lows. Apple has had their challenges as well, but before Apple can be held accountable or embarrassed long enough, they launch something new. Apple doesn't hype it for a year as Microsoft does, they trickle out a rumor here or there and then launch. And it feels like they're launching every week! People forgive the shortcomings of the first version (cost and quality) and they gladly move on to the third and fourth version. Our attention span is shorter and Apple is brilliantly taking advantage of it.

What are you allowing to pass you by? Stop waiting for things to be perfect to jump in. Jump in today or watch the opportunity pass you by. It's the only way you or your business is going to succeed.

Note: Some of my details on Apple were inspired by this great post on Apple's success at Daring Fireball.