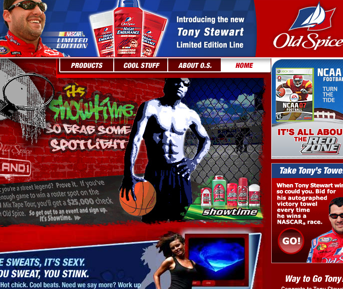 My son and I had to make a run to the store tonight for some deodorant. We weren’t smelly or anything… he just started running out and so he stole my deodorant. So we get to the deodorant section at the local Kmart and he starts picking up Old Spice. Old Spice? I remember Old Spice 30 years ago. That means it’s Older Spice now, right? I guess not. Perhaps with aging, it’s gotten better.

I tell him to buy some good ol’ Mennon or Right Guard. He says no. He wants Old Spice.

I tell him I don’t want my house all stinkin like teenager and Old Spice.

He holds onto the Old Spice with a death grip.

I buy him the Old Spice.

When did Old Spice become cool? What the heck happened? One day, they’re putting together soap on a rope Christmas Packages and the next day they have some incredible website called When She’s Hot (or… with the humor of URLs, perhaps it’s… ‘When She Shot’. Anyways, you can actually mix your own beats and video at the site with some of the eye candy clips they have there. Here’s my video.

Good luck with that, Bill! I went with the Right Guard XTREME.

They have Skateboarders… woohoo.