It's surprising that there wasn't more news of the engagement of WOT and Facebook. WOT stands for “Web of Trust” and is a community-built site of users that rate websites.

In May, Facebook began to use the service as a police dog to protect its users against clicking through to malicious sites. Sounds like a good move by Facebook on the surface, but the underlying pinnings of WOT are actually a bit scary. On some sites, WOT may as well stand for “Web Of Trolls”. One case in point are the sites of Email Service Providers. 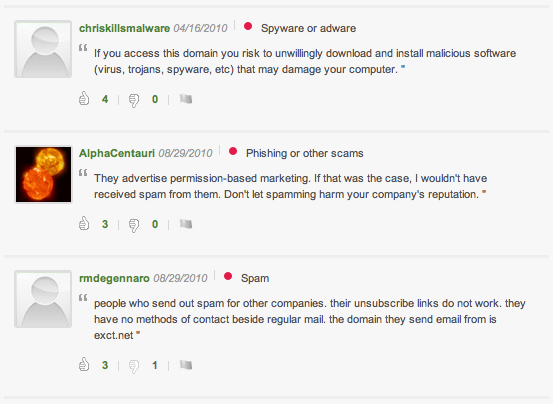 Mailchimp, Emailvision, iContact and ExactTarget are 4 very different email service providers but all of them are heavily engaged in permission-based marketing, ensuring their clients are both educated on SPAM regulations, and all have engaged deliverability teams that are constantly building relationships with Internet Service Providers. If they did allow SPAM, their deliverability rates would drop and they would simply be out of business. An ESP lives and breaths on its ability to get the message to the inbox.

I don't doubt that some unsolicited email made it out of any of these ESPs… but I also don't doubt that the client responsible for the SPAM was counseled or even ejected from the company. Each of these ESPs have strict guidelines that a company must agree to. Instead of holding the clients accountable, though, WOT defaults to the source of the messaging via IP addresses and applies the criticism to the ESP, regardless of their standing in the email community. Since WOT started as a European site, sites in Europe are also rated much more critically than sites in North America.

The result of these poor ratings is that these sites are sometimes blocked by sites, like Facebook, when users click an external link. Imagine losing all your Facebook traffic because of a faulty WOT rating! That's a substantial hit nowadays.

The problem is that many people feel that there's wisdom in a crowd when there's really no such evidence. Most crowds are made up of anonymous influencers who are followed by anonymous followers… and some of the influencers aren't exactly subject matter experts on the topic they are rating.

In this specific case, we see that the WOT community… many of whom probably have never had to use an Email Service Provider… think that anyone pushing out mass volumes of email is simply a spammer. The ratings are anonymous, poorly written, and don't provide any evidence that the source of the reputation issue is the Email Service Provider in question. There's no means to question a review for accuracy or knowledge… and there's no recourse for the companies who fall victim to the crowd.

If we're going to leave our site's reputation up to the wisdom of the crowd, who's making sure the crowd is educated and knows what it's doing? It would make much more sense for verified customers of these sites and services to be able to rank the vendor than total strangers who are simply following the wisdom of the crowd. I'm not sure WOT is a good solution for Facebook or any other application to use.

I'm looking forward to seeing how my post impacts this domain's trustworthiness! I trust it won't be pretty.