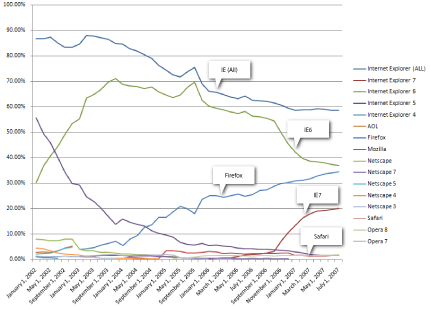 Safari hasn’t even made any impact, even with its attempt to push into the Windows market. Perhaps part of Safari’s problems are the immediate and embarrassing security issues that were uncovered within 2 hours of its download by Lar Holm.

IMHO, the issue with Internet Explorer is purely due to two reasons:

I recently loaded up Vista on my son, Bill’s, new screaming PC and I have to tell you that the interface is dazzling, especially with the Aero effects running. Bill was able to install Office 2007 for school and I love the ribbon menu system. It may take me some time to figure out where everything is – but thus far, each feature is intuitively positioned with fantastic visuals that accurately represent the action.

Given these User Experience and Usability enhancements in core Microsoft products, I’m surprised that the Internet Explorer team hasn’t put out a call for help.

Don’t listen to me, though… just keep your eye on the statistics.

UPDATE: One more statistic according to W3Schools that’s important is the penetration of Javascript usage. Because it’s becoming such an essential part of the User Experience, use of Javascript-enabled browsers is on the rise, with only 4% of browsers either not supporting it (e.g. IE Mobile) or disabled.