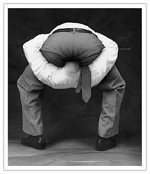 Everyone has heard of the expression having your head up your butt. With Gannett, they really have brought the expression to reality, though. Ruth Holladay is a wickedly sarcastic blogger with a sharp tongue… and she’s dead-on, especially when it comes to Gannett and the Indianapolis Star.

We both used to work there, Ruth retiring from editorial and me getting escort when Gannett brought in a VP who cleared out an entire department of talent.

The recent rumors are that Gannett might be preparing for sale soon. I don’t really care. I sold my stock as soon as I left, recognizing that my departure was another symptom of Monsterus Corporititus, also known as having your head up your butt.

First some background – I worked for two Newspaper organizations – Landmark and Gannett. Although the two companies were similar in industry, they couldn’t be more different in management. While Landmark believed in autonomy for its properties and managers, Gannett believes in control.

As a Database Marketer at a Gannett newspaper, I had competition in the local region and in the company. It wasn’t outwardly obvious and I had great relationships with corporate – but the fact was that, in order for them to be successful, they had to put me out of business. The more the corporation could prove its worth by developing corporate strategies, the more staff they could eliminate from the local newspaper. Their livelihood, bonuses, and promotions depended on it. So, while I may have had more experience and been a better performer – that kind of information had to be downplayed out in McLean, Virginia.

Gannett does this throughout all departments, most critically in Editorial. The single largest competitive advantage any newspaper has over the Internet and other media resources is its local talent. These are the people who have created relationships in the community and know where the cracks and concerns are when it comes to our civic leadership. It’s also the department that seems to make the most sacrifices. The people I was friends with in Editorial worked their butts off day and night with tons of open positions that were never going to be filled. Many of them are gone now… a great loss for this city.

It’s Easy to See WHERE the Profits go:

The Indianapolis Star is now a mix of AP and advertisements with a sprinkling of local reporting in between. Industry experts will tell you that these cuts have been necessary because people are turning to the Web for their news and information.

I can’t put into words how upset that gets me. It’s like blaming Toyota for failed sales in domestic autos. Gannett Corporate Employees have no one to blame but themselves. They had the opportunity to leverage their solid standing in the community and leverage it for both advertising and editorial. Instead they made the local newspaper relinquish control to the corporation.

One look at The Indianapolis Star versus Gannett will provide the most obvious proof of how things work.

While Gannett won awards with one of the most incredible corporate headquarters in the country, The Indianapolis Star could be voted one of the ugliest in the city. I got to work in an attached building, the American Building… which was rumored to be inhabitable outside the first few floors. I realize that this isn’t the issue, it’s just a great visual of it.

It appears that profit margins are sustaining through attrition and circulation losses. Locally, the Star continues to supplement it’s editorial with photographs and blog posts from its readers. While I don’t disagree that this is a great business decision, it’s sad to see the savings being pushed to corporate instead of being invested in local talent.

IndyMoms is an example of how to do things right. IndyMoms’ General Manager is Jennifer Gombach, a fantastically talented woman that I had the pleasure to work with at The Star.

Jennifer is not just a talented marketer, writer and entrepreneur, she’s also a local and has been with the newspaper for a very long time (and was frequently overlooked). I would have loved the opportunity to work under Jennifer while I was there. She was a great mentor and a good friend.

What Gannett SHOULD Do

If Gannett really wishes to make a go of it, the layoffs need to start with their own corporate staff. I’ll apologize to my friends and colleagues there ahead of time, but this is where your problems lie.

Provide your local newspaper with the autonomy they need to sustain the business. Allow them to ‘invest’ in their businesses but hold them accountable. Investment needs to cut into the profit margins that they’ve grown to love at headquarters but it’s necessary. Begin promoting from within the newspapers instead of shuffling talent all over the country.

Take a look at what Jennifer has done with IndyMoms. It’s local, it’s personal, and it’s great. They’ve connected with readers and provided a perfect medium for local advertisers to connect with a specific local demographic. It’s the perfect recipe for success and could be repeated many times over.

Gannett needs to get its head out of its butt. Some folks say All politics is local! In the Newspaper Industry, All dollars are local! I wouldn’t hold my breath waiting for Gannett to fire itself, though.