Getting your brand visibility in the news feeds of your target audience is the ultimate achievement for social marketers. This is one of the most important, and often elusive, goals in a brand’s social strategy. It can be especially difficult on Facebook, a platform that has an elaborate and constantly evolving algorithm designed to serve audiences the most relevant content.

EdgeRank was the name given to Facebook’s news feed algorithm years ago and even though it is now considered obsolete internally, the name has lived on and continues to be utilized by marketers today. Facebook is still utilizing the concepts of the original EdgeRank algorithm and the framework it was built on, but in a new way.

Facebook refers to it as the News Feed Ranking Algorithm. How does it work? Here are the answers to your basic questions:

Any action a user takes is a potential news feed story and Facebook calls these actions edges. Whenever a friend posts a status update, comments on another user’s status update, tags a photo, joins a brand page, or shares a post, it generates an edge, and a story about that edge could potentially show up in the user’s personal news feed.

It’d be extremely overwhelming if the platform showed all of these stories in the news feed so Facebook created an algorithm to predict how interesting each story will be to each individual user. The Facebook algorithm is called “EdgeRank” because it ranks the edges and then filters them into a user’s news feed to show the most interesting stories for that particular user.

What is the Original EdgeRank Framework?

Affinity score is the relationship between a brand and each fan, measured by how often a fan views and interacts with your page and posts, in addition to how you reciprocally engage with them.

Edge weight is measured by compiling the values of edges, or actions a user takes, with the exception of clicks. Each category of edges has a different default weight, for instance comments have higher weight values than likes because they show greater involvement from the fan. You can generally assume that the edges which take the most time to accomplish tend to weigh more.

Time decay refers to how long the edge has been alive. EdgeRank is a running score, not a one time thing. So the more recent your post, the higher your EdgeRank score. When a user logs into Facebook, their newsfeed is populated with content that has the highest score at that particular moment in time. 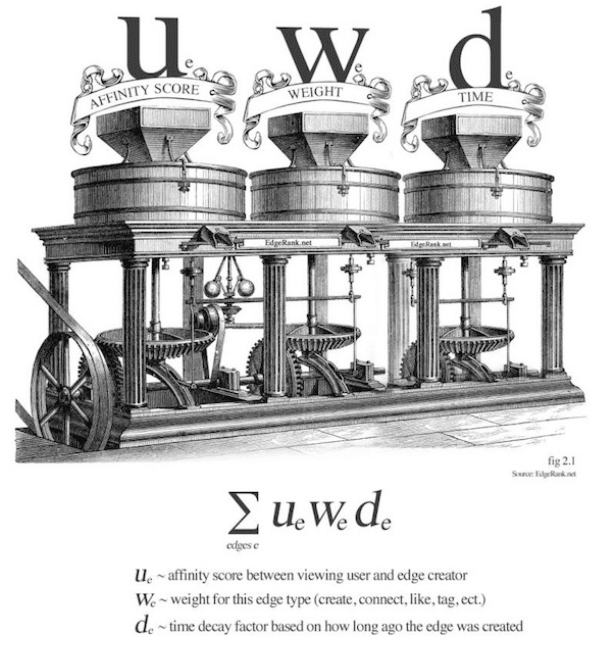 The idea is that Facebook rewards brands who build relationships and put the most relevant and interesting content at the top of a user’s newsfeed so that posts are specifically tailored to them.

The algorithm has changed slightly, getting an upgrade with new features, but the idea is still the same: Facebook wants to give users interesting content so they will keep coming back to the platform.

One new feature, story bumping, allows stories to reappear that people did not originally scroll down far enough to see. These stories will be bumped up near the top of news feed if they are still garnering lots of engagement. This means that popular page posts could have a higher chance of being shown even if they are a few hours old (changing the original use of time decay element) by going to the top of the news feed if the stories are still receiving a high number of likes and comments (still using affinity score and edge weight elements). Data has suggested that this shows audiences the stories they want to see, even if they were missed the first time around.

Other features are aimed at letting users see posts from the pages and friends they want in a more timely fashion, especially with trending topics. Particular content is said to only be relevant within a certain timeframe, so Facebook wants users to see it while it remains relevant. When a friend or page you are connected to posts about something that is currently a hot topic of conversation on Facebook like a sporting event or TV show season premiere, that post is more likely to appear higher up in your Facebook news feed, so you can see it sooner.

Posts that generate high engagement shortly after posting are more likely to be shown in the news feed, but not as likely if activity drops quickly after posting. The thinking behind this is that if people are engaging with the post right after it is posted but not as much a few hours later, the post was most interesting at the time it was posted and potentially less interesting at a later date. This is another way to keep content in the newsfeed timely, relevant, and interesting.

How Do I Measure My Facebook News Feed Analytics?

There is not a third party tool available to measure a brand’s EdgeRank score since so much of the data is private. An actual EdgeRank score does not exist because every fan has a different affinity score with the brand page. Furthermore, Facebook keeps the algorithm a secret, and they’re constantly tweaking it, meaning the value of comments compared to likes is constantly changing.

The most effective way to measure the impact of the algorithm applied to your content is by seeing how many people you’ve reached and how much engagement your posts received. Tools like SumAll Facebook Analytics encompass this data into a comprehensive analytics dashboard perfect for measuring and tracking these metrics.

Marisa Negri is a full-time digital marketing guru and a part-time event planner. Marisa pairs her degree from the University of Georgia in advertising, sociology, and new media with both corporate and boutique experience in business development, digital marketing, ad/PR, and event planning with companies such as Electronic Arts, Paramount Pictures, Turner Broadcasting, and Sashay Events. Originally from New York and having moved around both coasts, she now calls Midtown Atlanta home.