The music industry and piracy, the movie industry and torrents, newspapers and online news. What do all these have in common? Supply, demand and a shifting market.

I'm a big fan of capitalism and lean quite a bit to the libertarian side of the political spectrum. I believe that free markets almost always find the right direction to move to. Every time I see the government cracking down on piracy, file-sharing and smuggling I wince. And every time I see the government defend an industry, I wince a bit more. I wince because I don't believe black markets would be around if it weren't for organizations monopolizing their products and defending their huge profits. 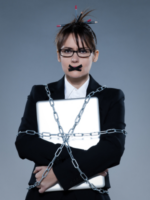 The Internet has opened the market on music and it's saturated. When I was a child, I didn't realize that there were millions of artists in the world. The marketplace only had room for hundreds or thousands. For me it was just KISS. Now that the marketplace has opened up, demand has stayed the same but the supply is everywhere. It's only natural to see that the costs of music would spiral downward while the supply increased.

But it didn't. The price of an album hasn't changed in 25 years despite the incredible supply of music and the ease at which it's distributed via the web. No one complained when the music industry was selling CDs a hundred times their cost. And, with movie stars, rappers and rock stars showing off their new Bentleys, it's hard for me to empathize at all with the industry. If honest people are sharing music instead of buying it, it means the risk of being caught outweighs the price of the music. The problem isn't honest people, music, or filesharing… it's that the music industry ain't what it used to be.

In my living room I have a HDTV and a surround sound system that I can shake the house with. Why would I go pay for a $12 movie ticket and $10 popcorn and a drink when I can watch a movie for the fraction of the cost in the comfort of my own living room? I can't match IMAX… I'm willing to pay extra for that experience. The movie industry isn't a battle between piracy and the movie cinema, it's a battle between the home theater and the movie cinema. And the home theater is winning!

If the movie industry hopes to succeed, they'd lower the price of cinema tickets and food, add some additional luxuries (perhaps dinner, wine and some cappuccino), and put in some circular seating with an intermission so I can make it a night out with friends. I can't download that experience!

I've read that newspapers are going to attempt putting up pay walls again. I think we've been through this a few times… and they still don't get it. The Internet is the information superhighway… newspapers are the potholes. Newspapers use content to fill the holes that they can't sell ads into and many have given up on digging deep to find the real story. I don't pay for a newspaper because I find better news online, direct from the source, without a slant, and without advertising wrapping around it.

Oh sure, I gave a go at The Daily.. an attempt by the newspaper industry to bring all the unreliability of newspaper delivery to the iPad. It's slow, it crashes, and it's rarely news. They should call the it The Yesterday! But, since news is an entire industry, there's somehow some entitlement they deserve outside the bounds of capitalism that entitles them to continue trying to make 40 percent profit margins? Sorry oldspapers… get back to great reporting and people will pay for the content.

In each of these cases, I don't fault the consumer and I empathize with the folks breaking the law. After all, isn't this just capitalism? When the cost surpasses the desire, the only thing left is a black market to get the product or service from. Unfortunately, these industries grew so big and powerful that they've got politicians in their back pocket to try to crank out laws every week to try to stop the hemorrhaging. Folks… this isn't a criminal issue, it's a market issue.

Given this rant, you may think that I'm all about piracy. Absolutely not! There are countless examples of products and services that have adjusted. And I believe that people are paying for content more than they ever have in the past. When I was a kid, my parents had a phone, a newspaper, a black & white television, and paid for vinyl albums. As an adult, I pay for smart phones, voice messaging, mobile apps, a data plan, a text messaging plan, (x my kids' plans) cable television, on demand movies, broadband internet, XBox Live, iTunes and Netflix.

These aren't just a few bad apples that have taken to a lifetime of crime. Chances are, the average person you know is pirating or distributing music or movies. When the crime goes mainstream, the problem isn't the crime… you have to start wondering what's flawed with the market that generates that type of response.

Locking up a guy that creates a network where people distribute and download isn't the answer, either. We've been through this with Napster and the Pirate Bay. With Megauploads down, a few thousand other sites are out there that will enable the activity. The newest ones are virtual private networks with anonymous gateways and encrypted communications so governments can't snoop. The piracy and theft market on music and movies isn't going anywhere.

I'm tired of these corporations stating that the money lost to the industry is in the [insert]illions. That's just a bold lie. People that were going to steal a movie weren't ever planning on spending the money in the theater. You didn't lose money by them stealing it, you lost money because you charged too much and the home theater is kicking your butt.

And don't tell me that people won't pay for content and our only recourse is to lock everyone up. We're all paying for content everyday! The price simply has to match the value. The folks at Angie's List have proven this… paid reviews are trustworthy and save their subscribers thousands of dollars. Angie's List has great retention with their customers and are so popular they were able to go public!

Markets are changing and these other industries are NOT adapting. Why are they making that a criminal issue and not an economic one? Keep up with the efforts of large corporations to criminalize more and more of the web by reading the Deeplinks blog at the Electronic Frontier Foundation.