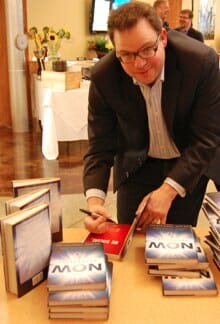 One of the people I go out of my way to hear speak is Jay Baer. This morning I had to wake up before the sun to drive up to BlogIndiana to hear his keynote – and it was well worth the trip. There are quite a few reasons. Jay has 20 years of experience as a marketer and doesn’t shy away from stating his opinion. Jay is also a genuine person – there’s no difference between who you see on stage and who you meet in person. As well, after seeing Jay speak a half dozen times, I’ve not seen the same presentation twice.

I was lamenting to Jay that I was curious how some blogs that were much smaller than mine were receiving more retweets, likes and mentions. I even wondered, perhaps, if some folks were gaming the industry. Jay didn’t think they were – he gets a ton of retweets and social sharing on his blog, Convince and Convert (a must read!).

I don’t believe the quality of the posts to be the issue – we’re very well respected in the marketing industry. Jay and I discussed the volume of traffic I was getting and, in comparison, his blog gets similar readership. However, his readers are quite aggressive at sharing the information that Jay puts out. Not a small amount – a huge amount… averaging 200 tweets a post!

In Jay’s corner is his incredible content, his expertise at communicating with his networks, and his ongoing speaking engagements. He also has a much larger following on Twitter and Facebook than we do. All around, Jay is a few stripes above my rank. If I’m a Captain, he’s an Admiral. I respect him very much.

In talking this out, it became evident that the folks who follow Jay are extremely social with great authority. People that follow Jay are up in the top ranks as well! Many of Jay’s followers have a huge following on their own – and they love sharing with their networks. This is the difference between my audience and Jay’s. I’m sort of a nuts and bolts guy fighting it out with marketers in the trenches. Though we attract folks of all levels of education and industry seniority… it’s a blog about marketing.

Jay has a blog about marketing as well, but he is much more focused and refined in the area of social media than I am. We cut a wide swath… with everything from analytics to email marketing. The audience I reach is engaged, but don’t have a proclivity to sharing or promoting the content that I write. Many of my readers are totally inactive in social media, focusing more on brand marketing and advertising.

Here’s my point. I was short-sighted as I whined about my content’s performance. I shouldn’t be discouraged at all – I should be encouraged that I’m speaking to an engaged group of readers who haven’t leaped into the social media void as of yet. I hope I can help them get there, but it may not be today or tomorrow, it may be years away. Your network will probably be similar, especially if you’re not in the online industries. Don’t get discouraged as you’re writing a ton of great content but it’s only shared by a handful of people. Not everyone is as social as we are.