Think of all the things you could do if you were able to define any task as: when something happens (this) then do something else (that). The this part of a task is the Trigger. Some example Triggers are if I’m tagged in a photo on Facebook or if I tweet on Twitter. The that part of a task is the Action. Some example Actions are then send me a text message or then create a status message on Facebook. 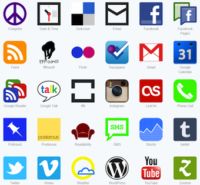 This is the idea behind If This Then That, a remarkably simple system to automate tasks via a ton of medium channels. And when you create something cool, you can share it as a recipe (examples)!

If This Then That is a new wave of applications that integrate with Application Programming Interfaces but don’t require any programming experience. We’re excited to see these hit the market. Another one focused on content automation is Tarpipe!