Growing up I was raised by an optimist and a pessimist, my Mom was probably the happiest funniest friendliest person you could ever meet. She made sure that I was raised with an abundant mindset, wishing nothing but good for everybody and doing my best to help people out. As I started to learn and mature I asked her about why she was helping some people she really did not like and her response was simple.

The boom years of the 90's really proved my Mom and my econ professors were both geniuses. For more than 15 years (until 2008) a rising economic tide really did raise everybody's boat. For a majority of small businesses those years were excellent, buyers were abundant, profits were comfortable and with some effort it was pretty simple to get out and find ready willing and able prospects to grow your revenue. 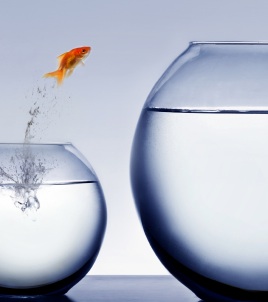 In 2008, the other half of my parent's message started to make sense. My Dad is a great guy but unlike my Mom he was pretty good at keeping his mind focused on the downside of what was actually happening. His message to me was a little different. He told me Even dead fish float. What he meant was when the tide rises everything moves up but not everything is a boat. His point was really simple, bad economies do not create weakness, bad economies expose weakness.

For the past few years we have been learning to live with my Dad's message. And by WE, I mean the American economy. We have seen a huge number of businesses that made bad decisions. And when times were easy those decisions looked fine, there were no real problems or consequences for the bad choices. But as soon as we hit a bump in the road those consequences were exposed and all too often that exposure has led to catastrophic failure.

As a sales trainer, I spend my days working with business owners who are seeing a whole new side of their business. The salespeople they thought were great turned out to be doing nothing more than riding the tide of a few key clients who were growing. The salespeople who were willing to cut a little price in the good times are getting killed now that they have nothing to fall back to other than price cutting.

Those salespeople who did not consistently prospect have watched their sales volume collapse now that competitors are poaching their accounts. Two years ago these weaknesses may not have mattered, the economy was strong, buyers were plentiful and margins were healthy. The economy was growing and having weak sales processes and the wrong sales teams were problems, but they just were not big enough problems to fix.

Today it is different, your business is being held hostage. Your sales team is in control of your future and unless you know they are working from the right strategy, in the right structure and have the right skills even the recovery is going to be a challenge.

Matt Nettleton is a high impact, dynamic sales team leader and coach with a passion for results and a proven track record. I have more than 25 years of experience initiating change to achieving goals and optimizing resources for revenue enhancement, expense management and profit growth.