As defined by the FTC, native advertising is deceptive if there is a material misrepresentation or even if there’s an omission of information that is likely to mislead the consumer acting reasonably in the circumstances. That’s a subjective statement, and I’m not sure I want to defend myself against the powers of the government.

What is Native Advertising?

The Federal Trade Commission defines native advertising as any content that bears a similarity to the news, feature articles, product reviews, entertainment, and other material that surrounds it online. FTC Native Advertising: A Guide for Businesses

Last year, Lord & Taylor paid 50 online fashion influencers to post Instagram pictures of themselves wearing the same paisley dress from the new collection. However, they failed to disclose they had given each influencer the dress, as well as thousands of dollars, in exchange for their endorsement. Each violation of that lack of disclosure could have resulted in a civil penalty of up to $16,000!

More than one-third of digital media publishers are not compliant with the FTC’s rules that govern website native ads and sponsored content, according to a study released this week by MediaRadar.

Why Disclosure is Critical

Disclosure of native advertising is the law in the United States and in many other countries. But disclosure of a relationship with a brand isn’t just a legal issue, it’s one of trust. Too many marketers believe that disclosure could impact conversion rates, but we’ve not witnessed this at all. Our readers have been with us for a decade and trust that, if I publish a product recommendation, that I’m doing so with my reputation on the line.

Transparency with the consumer is critical, and promotional pieces shouldn’t suggest or imply to consumers that they are anything other than an advertisement. If a disclosure is necessary to prevent deception, the disclosure must be clear and it must be prominent. Adam Solomon, Michelman & Robinson

I wouldn’t ever risk my reputation. In fact, I get solicited almost daily to publish articles and get paid to backlink and I turn them down. At times, agencies even have the audacity to request that I post something with no disclosure. I write them back and ask them why they believe violating federal regulations is okay… and they disappear and don’t never respond.

Colleague Chad Pollitt recently published the 2017 Native Advertising Technology Landscape and it was quite a feat, walking through all of the channels and technologies influenced and touched by native advertising. 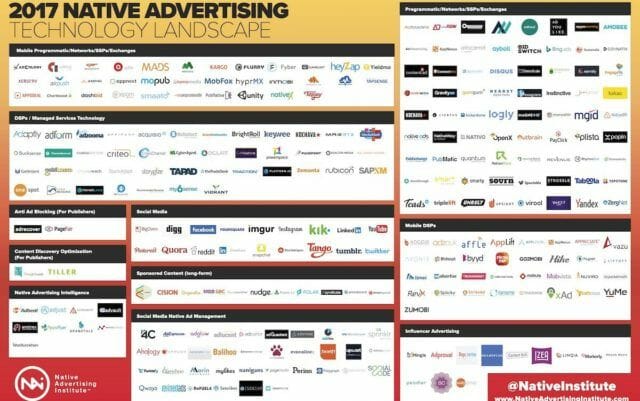 According to a newly published report by MediaRadar, Leaders and Lessons in Native Advertising, adoption and demand for native advertising are extremely high with an average of 610 new advertisers using custom content solutions each month.