The news is full of some incredible stories of humanity recently:

There are commonalities. Each of these people were at the top of the world. They were the ultimate authorities – no one could even come close to challenging them. 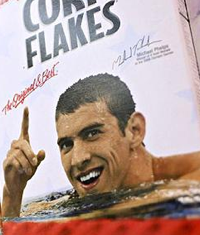 Authority is one of those things that someone can gain without a reputation. All three of these men were relatively common people before they attained uncommon authority. They achieved goals that were way beyond what appeared to be available to mere mortals like you and me.

Within a year, President Obama moved from a junior Senator to reach the highest office (arguably) in the world. In 10 years, AROD grew to be the best and most well-paid professional baseball player. In 7 years, Phelps became the most decorated Olympian in history, virtually unknown before the last 2 Olympics.

Reputation is a lot like a shadow. It’s always there and it’s always with you. While the sun is shining in your face, it’s behind you and, perhaps, forgotten. If you’re a normal person, no one pays attention to your shadow. However, when you’re standing above the crowd, you cast quite a shadow.

In this world where everything we do is recorded and available to everyone, we’re going to have to get used to humans being humans. None of us are perfect, nor will we ever attain perfection.

As you strive to build authority, just don’t forget that you have a reputation out there to uphold.