This week I’m reading Starbucked, by Taylor Clark, in preparation for the Indianapolis Business Book Club. Taylor Clark opens the book talking about Starbucks early days and how it was such an eye opener when Starbucks opened a new Starbucks right across the street – and both stores were the highest yielding stores in the chain.

It inspired me to write this post because I think there are ‘best practices’ but truly no formulas on successful marketing. I’ll be writing more about this for Age of Conversation 2, but I’m really disturbed by the ‘how to succeed’ rhetoric that you find all over the web. I tend to avoid supporting or touting bloggers and blogs that try to boil everything down to a formula. There is no formula.

What there is on the Web is plenty of Inspiration!

Perhaps the only formula to marketing is truly to differentiate everything you do… in other words, avoid the formula. I’ve built statistically valid direct mail programs for clients that should have yielded double-digit increases in response rates. The data was valid, the segmentation had no margin of error, the copy and layout were in accordance with all the ‘formulas’, and we even had some celebrities who threw their influence and name/face recognition in the ring – but the campaign bombed.

By following the formula, there was nothing to differentiate the campaign from the hundreds or thousands of other campaigns that followed the same rules. So – the campaign wound up with the rest of those formulaic campaigns, right in the garbage.

Why in the world would blogs bring forth such a force on the web? Some folks think it’s because it’s the massive participation, massive volumes of content, and the expertise that the blogger brings to the content. I’m sure those are influential… but that’s not all of it.

Part of what makes a blog so appealing are how they don’t conform to the normal journalistic standards. Some bloggers jump into cat fights with the competition. A blog on making money blogs about fine dining. I sometimes like to talk about politics and faith (and almost always get venomous responses). 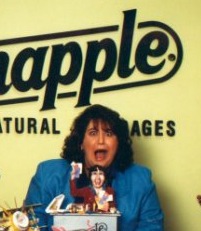 Blogs provide both content and personality, something not often related when it comes to corporate blogging.

Remember the famed Snapple advertisements from years ago? The use of Wendy Kaufman, the Snapple Lady, pushed sales of Snapple up from 23 million dollars a year to 750 million a year in 1995. Wendy was answering fan letters to Snapple in her own time, and the agency thought it would be a great way to promote the brand. The commercials were a huge success!

Quaker took over, Wendy was let go, and it all went kaput… following the formula! Quaker eventually gave up and let Snapple go. Now Wendy is a partner in Wendy Wear – plus size activity wear for women, promoted through a blog of course!

Back to my point – utilize the web to inspire yourself and to find new ideas on what folks are doing to market their products. Don’t follow the formulas… experiment! Make your own formula!