The Theory Applied to the Web:

Search engines supply the constant that determines the the magnitude of the forces between two websites. By developing a complex algorithm of PageRank that incorporates back links, authority, popularity and even recency, the search engines control the constant.

Imagine Google being the telescope looking for the largest planets and the blogosphere being the universe. 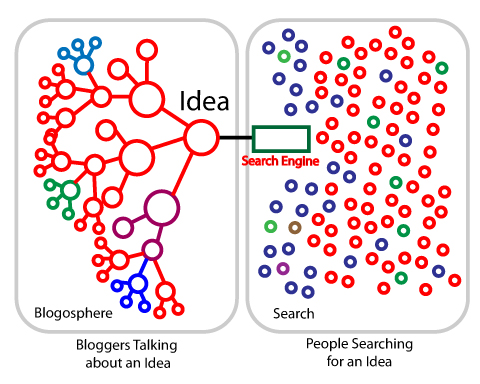 I don’t know if Larry Page (the ‘Page’ in PageRank) and Sergey Brin actually made a parallel between Newton’s theory when they developed the core algorithm(s) that carried Google to stardom. Understanding this theory and applying it to the web is one way of looking at Search Engine Marketing, though. As well, I just think it’s just plain geeky cool that a parallel could be drawn.

So – if you wish to get better ranking on a Search Engine, your best bet is to find other sites that rank better on keywords that match and see if you can get their attention. If they do provide you with some attention, the force applied will move you closer to them. Blogs with large masses (er… PageRanks) are able to pull other smaller sites closer.

Paid links are now both very popular and under attack by Google. Google regards paid links as artificially driving organic search results and pulling sites up that, perhaps, don’t deserve it. Many bloggers (including me) see it as capitalizing on their hard-earned authority.

Almost daily I receive offers from legitimate businesses who wish to leverage my site to pull theirs closer. I’m exceptionally finicky, though. To date I’ve turned down over $12,000. That may seem like a lot of money to turn down, but the risk is that I prostitute my blog and Google throws me in jail (the supplemental index).

In the big picture, I’m not sure that Google can overcome the paid link fiasco. Seems like some folks are just applying the laws of gravity and Google is trying to fight the laws of nature.

Those Microsoft Guys are Brilliant!

It did not inspire this post, but as I researched this post I did find that Microsoft released a Gravitation-based model for information retrieval paper in August 2005. Interesting.